Welcome to the Commander’s Herald news update, a weekly recap of everything a Commander player could need to know from the Magic the Gathering world. In these articles we’ll make sure you are caught up on any news, events, and announcements impacting the community with an emphasis on Commander news.

The preview season for the newest Standard legal set, Strixhaven: School of Mages has been in full swing and will be wrapping up on April 2. You can check out the full card image gallery at Wizards of the Coast’s full card image gallery compiling all the cards in Strixhaven. The Mystical Archive, new premium treatments, with alternate art and borders as extra-rare inserts in select booster packs also will have it’s gallery fully available.

Even though the previews will be done for Strixhaven, it does not mean previews are completely over. Starting on Monday April, 5 previews for Commander 2021 will be rolling out with a different deck featured each day. Make sure to check out the preview schedule to stay up to date with the newest deck release and where you can find the new cards as they are announced.

Check out our Strixhaven rules and mechanics primer for more information about the set.

Over the past weekend artist Jason Felix, known for his art of many Magic cards including All is Dust, was in the headlines. The Mystical Archive art for the card Crux of Fate, featuring the character Ugin the Spirit Dragon bears a striking resemblance to fan art created several years ago. The plagiarized art of Ugin in similar pose and style led to claims the art was plagiarized. Jason Felix has apologized for plagiarizing the art with minimal alterations in a series of tweets.

Crux of Fate. I’ve waited to make a public response because I wanted to reach out to the affected artists Kitt Lapeña, Raymond Swanland and WotC first. I was overworked, but that’s no excuse. I messed up and I’m trying to make amends.

I will be compensating the artists, and hope to advocate for their names to be on the card instead of my own. The artists did not deserve this. It’s not much and I don’t expect forgiveness.

As a result of the issue Wizards of the Coast also released a statement on the matter once it was made public.

A statement regarding artwork used for the card Crux of Fate from the Strixhaven: School of Mages Mystical Archive: https://t.co/UN7R1cKpXp

It has come to our attention that the card Crux of Fate from the Strixhaven: School of Mages Mystical Archive may overtly feature Magic: The Gathering fan art and the contracted artist did not receive permission for this incorporation. These actions do not reflect the values of Wizards, and, as a result, we will be suspending future work with Jason Felix until we have been able to bring this matter to successful conclusion. 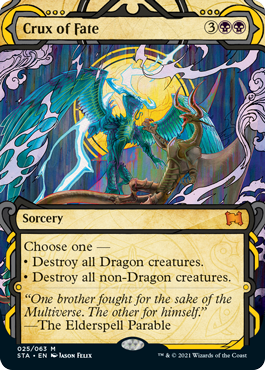 Since Felix’s apology no updates have been announced on when or if Felix will be contracted again in the future.

In an earlier announcement, Wizards of the Coast also gave additional details on what to expect regarding set releases for the rest of 2021. Modern Horizons 2 will be the first summer release of the year as a follow up to 2019’s original Modern Horizons. The set will not be Standard legal and instead be released for play in Modern, Legacy, and Commander formats. We can look forward to its release in June.

From the announcement we can expect to see “higher power level and greater complexity with even more of what they loved in Modern Horizons.” The original Modern Horizons featured many dominant cards in 60-card formats along with high powered legendary creatures for Commander like Urza, Lord High Artificer. We can certainly look forward to a shake up for many formats with the arrival of Modern Horizons 2. There also have been new card treatments announced in line with what we have seen from many recent sets.

The July release which had been known typically for Magic Core Sets will be getting a shake up. Instead of the more generic setting of traditional core sets Adventures in the Forgotten Realms will be set in Faerun. Players of Dungeons and Dragons will be familiar with the setting as it hosts many Dungeons and Dragons adventures. This will be the first crossover between the brands taking place on Magic cards complimenting the guidebooks that had been released for D&D style adventures set in various Magic the Gathering planes.

Finally, finishing up the year with the final set we will actually be receiving TWO sets.

More details surrounding the sets are sure to be released leading up to the actual releases. Make sure to stay tuned to (insert name of series) for all the up to date information once available!