This week’s theme for Finals is “Blood”.

What comes to mind first when I think of the theme of blood is paying life for costs, and no commander exemplifies that better than K’rrik, Son of Yawgmoth. When most players see that commander across the table from them, they’re almost immediately on guard, and a target is painted on that player, and there’s a very good reason for that. When you’re able to circumvent the most basic element of the game of Magic (using your mana to cast spells) by using your life as a resource, you can do so much more in a turn compared to the other players. Cards like Gitaxian Probe and Noxious Revival offer players essentially “free spells” and ways to do more in a turn using life, a resource we have plenty of in Commander. There is a reason (though I wish I could play with my Japanese Mystical archive version of it) why Channel is banned. It’s why Birthing Pod is incredibly powerful: even though you still have to pay one mana for it, getting to tutor a creature for one mana is insane value. Saying all this, life is a resource and it’s good that there are cards that give you the choice to use it. At the cost of potentially getting ahead, it puts you technically closer to losing the game.

Vampires enjoy playing in this space as well, draining opponents for life to become stronger. There are also some that can take life from you to become stronger as well to reward you later for your tribute. Before we get to the decks and challenges, let’s see who made it this far: 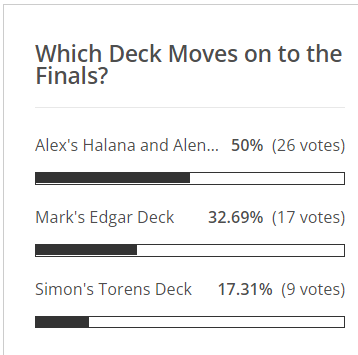 Congratulations to Mark and Alex!

A big thank you to Simon and their Torens, Fist of the Angels deck! It was a pleasure to have you on the series and I hope you can join us for another one down the road!

Now the challenges for this Finals round are:

First up is Mark!

Another round, another fresh set of challenges. I tried this round to get a little more creative with my brew, and I’m now looking at a deck I think would be a lot of fun. So let’s get into it.

Looking at the first challenge, I needed a Vampire commander. I knew I didn’t want to build something generic, like Edgar Markov, so I looked at the color combinations and abilities and one stood above all the rest: Rayami, First of the Fallen. I really like how we can use cheap creatures and removal to go with a Voltron-like strategy to smash our opponents’ faces.

Before getting into the other two restrictions, let’s go over how the deck operates. We want to drop a lot of creatures we don’t care about dying to move things like deathtouch, double strike, and flying to Rayami. We have ways to sacrifice our creatures for additional value with cards like Ashnod’s Altar and Viscera Seer, and we have utility cards that require a sacrifice, like Village Rites and Spark Harvest. While we’re sacrificing our own creatures, Rayami gives a “blood counter” to ANY creatures killed, and then they get sent to exile, so we can use the deck’s removal, like Putrefy and Bone Shards, to deal with opponents’ creatures and also steal their abilities.

Now on to what could possibly hurt the deck the most: the restriction to 10 rares or mythics. That being said, we just need to prioritise what helps us go for a win. The all-star rare may be Stonecoil Serpent; with that, we can give Rayami reach, trample, and protection from multicolor for no cost by casting for zero. We also run the Sanguine Bond and Exquisite Blood combo.

The last challenge was to have 23 cards with “blood” written somewhere on it, which was a deceptively difficult challenge to complete without taking away from the deck or going over our 10 rare/mythic cap. What we do have are several small creatures, like Blood Researcher, Blood-Toll Harpy, and Bloodthirsty Aerialist, that we can run and let die to give Rayami evasion. We could use newer cards to create Blood tokens, like Syphon Essence, but most of the cards that create these tokens move the deck’s curve up too much for me, and those creatures don’t help us much with our strategy.

So the last place we can have “blood” on the card is down in the flavour text. This may feel like a cop-out, but the cards it gets us I think make up for it. Mortal Wound from Visions can stop an opponent from attacking and giving us their creatures’ abilities. Culling the Weak lets us sacrifice a creature and net us mana. If you’re a fan of old art, we can run an older 5th Edition or 6th Edition of Ashnod’s Altar to hit our “blood” quota.

Thanks Mark! Hope Rayami can power the way through for you this round!

Finally we have Alex!

For this challenge I decided to once again go with a secret commander; this time I went with Shirei, Shizo’s Caretaker! Shirei is one of my favourite EDH cards, as you can loop creatures on each turn, including opponents’ turns. I chose Rayami, First of the Fallen to helm this deck, as green helps find Shirei, has excellent creatures to loop with Shirei, and Rayami’s ability works well with our edict effects.

When building this deck I went all-in on Shirei. I want to get my secret commander out ASAP and then overwhelm my opponents with sheer card advantage. Tutors such as Vampiric Tutor, Grim Tutor, and Eldritch Evolution help find Shirei. Once Shirei is in play, we can start enacting our plan of sacrificing and reanimating creatures with power 1 or less.

Our payoff cards include Sakura-Tribe Elder (four basic lands per turn cycle!), Caustic Caterpillar (endless removal for artifacts and enchantments) and Bone Shredder (repeated creature removal). Bone Shredder in particular works well with Rayami to start bolstering his abilities. To repeatedly kill off our creatures, I added repeatable sacrifice outlets, like Viscera Seer, Carrion Feeder and Ashnod’s Altar. All of these can activate at instant speed, letting us do cool things with cards like Mesmeric Fiend. If we sacrifice Mesmeric Fiend in response to its trigger, the leave-the-battlefield effect will occur first and then the enter-the-battlefield trigger. This means we can permanently exile cards from the hands of our opponents; four cards every turn cycle, in fact!

Then we have our next level of payoffs, cards that profit from us repeatedly sacrificing creatures. These include Skullclamp, Pitiless Plunderer, Pawn of Ulamog, and Zulaport Cutthroat. Zulaport Cutthroat is also a non-infinite combo where we can very quickly drain the table.

The supporting cast to enable this is mostly ramp pieces and the aforementioned tutors. Mana dorks are the preference here, as they are the most efficient ramp, and they can later double up as sacrifice fodder. Cards like Llanowar Elves, Elves of Deep Shadow, and even Blood Pet are excellent. We also have a couple of counterspells, Counterspell and Negate, but I held off from including too many. I want to use all my mana most turns, and I prefer to play an attacking game and force opponents to react to us.

Lastly we have non-repeatable sacrifice effects. Ideally these are used in conjunction with Shirei in play, but if needed we can fire them off earlier to navigate to Shirei being in play. Symmetrical sacrifice effects (sometimes called edicts by greybeards of the game, after Diabolic Edict) still affect us, but our deck is built so that the damage is minimal while for opponents it can be backbreaking. Innocent Blood is the best one, at only 1 mana, but I also included the aforementioned Diabolic Edict. These work excellently with Rayami to both exile the creatures and start getting blood counters. I included other cards like Village Rites, Bankrupt in Blood, and Plumb the Forbidden as powerful one-shot card draw effects.

What I like best about this deck is how quickly you become the archenemy once Shirei is in play. I find nothing more satisfying than being ganged up on by all three opponents only to still steam roll through with the ghastly amount of advantage Shirei provides. It’s also awesome to subvert the public information of your commander to trick and mislead your opponents. They think your deck is one thing when actually it’s an entirely different reanimator-based deck.

Great stuff Alex! Hopefully this showing of Rayami can take you to valuetown, and by doing so a victory!

Now that you’ve been mesmerised by these decks and their vampiric leaders, it’s up to you to vote to see who won this battle of blood! For the first time in CUTs short history, we have two contenders’ decks helmed by the same commander! Make sure you read carefully to make sure you pick the one you want to win!

Next time we have some really cool and awesome guests joining us for a special edition of CUT, so come on back to see who won this one and who is next on CUT!

Remember, if you don’t love it CUT it!

If you or anyone you know would like to be a part of a future CUT article you can email the.only.travis.stanley@gmail.com or contact me on twitter @chipman007 !