Innistrad: Midnight Hunt is out in the wild and I couldn’t be more excited!

Arlinn, the Pack’s Hope, is one of my favorite cards of the set. I also like Wrenn and Seven, but I have always been a fan of Arlinn Kord ever since her debut in Shadows Over Innistrad. I know this isn’t a thinkpiece column, but I always like thinking about if Planeswalkers were commanders and what that shift would be like for Commander as a format. I know that Oathbreaker is a thing, and I respect that, and to be honest, it’s kind of cool! But still, having a Planeswalker as your commander really hits home for me flavor-wise.

The great thing about our format is that you can have a talk with whomever you sit down to play with about it. Now, you might say “but Travis, they have already released 13 Planeswalkers that can be your Commander and some can even be together in the Command Zone, isn’t that enough?” To that I say, no dear reader, it isn’t enough. I think I understand why Planeswalkers can’t be commanders, power level issues, more possible bannings, and unfun gameplay by virtue of having a commander that if you don’t deal with can get extremely out of hand extremely quickly. Also it fundamentally changes the aspect of having a Legendary Creature be your commander. Maybe I will make a challenge down the road to have people use Planeswalkers as their commanders to see what gets built and how it works out. Thanks for reading this old man rant about things that he has no power in changing. Onto the decks!

Last week Cody, Toriofthevast, and Beck all battled it out to see who would make it to this article! 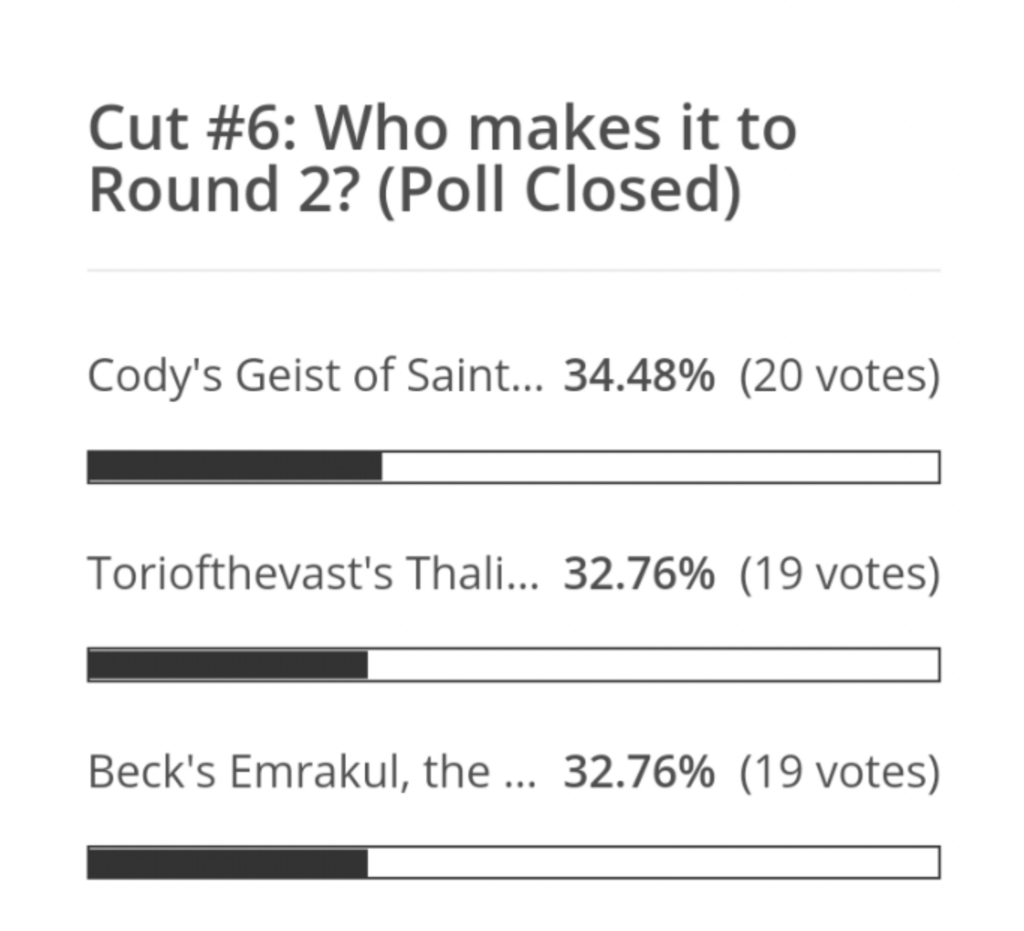 Congrats Cody on coming in first, and a tie for second! Wild! Great job all. Due to personal reasons, both Toriofthevast and Beck could not contribute to this round’s challenge. I would like to give them a big thanks for being on CUT, and I hope we get to see them again! Due to that I will be submitting a deck, and seeing how well I can do my own challenge!

First up is Cody!

Uncommon Legendary creatures tend not to put their finger down on the power scale that heavily, but that’s not to say power doesn’t exist at that level. Tatyova, Benthic Druid, is an uncommon, and is one of the most powerful commanders in her colors. However, given the restrictions listed and the sets we would be working with, I had to choose something that I knew would give me a large pool to work with. In addition, I didn’t want to go with anything more than two colors to help smooth the mana because of how few rares I could use. This led me to Shanna, Sisay’s Legacy, and an Innistrad staple strategy: Human tribal.

Humans are one of the most supported creature types across Innistrad, with a ton of powerful creatures and synergies across the two blocks the plane encompasses, and a low-to-the-ground aggro deck lines up perfectly with what our commander wants to do. This deck acts on multiple axes, not only able to play a voltron-style game by pumping up our commander, but also by going wide with our army of villagers.

The biggest restriction in deckbuilding is the cap of 8 rares/mythics, which really cuts into a lot of what we’re able to do. Notably, despite being a Humans deck, you’ll notice that we’re not playing Thalia, Guardian of Thraben or Thalia, Heretic Cathar. While both are undeniably powerful cards, there are other rares in these colors that will support our deck significantly more. Outside of a stax or prison strategy, they offer efficient bodies, but we need our cards to do a little more than that. Such honors goes to notable non-humans such as Craterhoof Behemoth, Angel of Glory’s Rise, and Sigarda, Heron’s Grace. Craterhoof is a self-explanatory finisher that will turn our mob of small creatures into a massive trampling army. Sigarda gives us support to not only all of our humans, most specifically our commander, but also gives us the ability to use our graveyard to make more recruits for our army. Angel of Glory’s Rise is most known for being a finisher in Oops, All Spells in Legacy, but here provides a massive late-game swing for us, should our strategy get disrupted by board wipes.

The other slots are used largely for support, for card advantage. Green and White have a hard time keeping up with other colors when trying to maintain advantage, so we’ve added Tireless Tracker as a way to generate Clues for us to sink mana into and Mentor of the Meek which will allow us to cantrip our large amount of small threats. Lastly, we’ve included the powerhouse of Thalia’s Lieutenant, which will act as a pseudo-lord to our army (and makes best friends with Emancipation Angel), Cavern of Souls to keep blue decks off of us and fix our mana, and Gavony Township, which will continuously buff our army with mana we’ll have in the late game.

At the lower end of the power scale, we’re running other cards to generate advantage, such as former standard all-stars Duskwatch Recruiter and Thraben Inspector. We also have a smattering of other cards with Investigate to generate Clues for us, such as Briarbridge Patrol, Byway Courier, and Humble the Brute. Cards like Hermit of the Natterknolls, Lambholt Elder, and Grim Flowering will also help us by keeping our opponents honest during our turn, and in the case of Grim Flowering, giving us a way to come back in the event of catastrophe.

To fight back, we also play a small package of removal against key threats. Green and white arm us heavily against artifacts and enchantments with cards like Naturalize and Natural End, but we also play more versatile threats like Rain of Thorns, Bramblecrush, and Angelic Purge to handle other problem permanents, most notably problem lands. Bound by Moonsilver, Defang, and Faith Unbroken give us access to creature removal, as well as the classic Fiend Hunter.

While they may not look like much, our small gathering of humans, when working together, can bowl over people who underestimate people. So grab your friends, your torches, and your pitchforks, because we’re soon returning to Innistrad, and the hunt never ends.

Great job Cody! To err is human, but to grr…brains is most definitely zombie.

Poking around the uncommon legendaries, a few popped out to me at first Narfi, Betrayer King, Shessra, Death’s Whisper, and Thalisse, Reverent Medium. Narfi has already been done on this series, so I was left with either Shessra or Thalisse. Ultimately I chose Thalisse, not only because she is a very impressive token maker, but also because Innistrad plays very well with tokens and especially with spirits.

First off, the tokens producers found in those blocks are mostly rare and/or mythic, so I really had to split hairs and choose the ones I believed fit into my style of play the most. Hanweir Militia Captain takes a little bit to get started, but once you flip it over, generating tokens every turn is exactly what this deck wants to do. Another slow token producer, but who pays off in time, is Bloodline Keeper. Being able to support Thalisse’s flying spirits with some flying vampires makes this card too good to leave on the cutting room floor. Another interesting card that has synergy with Thalisse is Drogskol Cavalry, as I said before, Innistrad has spirit tribal support, and Drogskol Cavalry not only rewards you for making spirit tokens with Thalisse, it itself is a token producer.

Alongside the creatures that create tokens for us, we have a few spells to help us out in our Campaign of Vengeance. Endless Ranks of the Dead supplies us with a constant stream of wonderful zombie tokens, bonus if the opponent can’t get rid of it, the zombie army will just keep growing and growing. Speaking of zombie armies, Army of the Damned and Moan of the Unhallowed can not only be cast once to bolster your numbers, but can be cast twice in fact! If zombies won’t do it for you, how about some angels? Entreat the Angels is a powerful card and even more powerful if you are able to cast it for it’s miracle cost, letting you get even more dangerous flyers alongside your spirits.

Now that we have ways to generate a solid amount of tokens, lets talk on how we get them through for damage. Intangible Virtue has a great static boost of +1/+1 and vigilance, letting us swing in with our tokens and not fear about lowering our defenses. The classic Cathars’ Crusade, making sure the more tokens you pump out the bigger and badder they will be and closer you’ll be to victory. Usually tokens are pretty low power so this is where Behind the Scenes comes in. Making our tokens essentially unblockable, as well as having a way to crank up their power at instant speed!

There are lots of enter the battlefield/death trigger effects that create tokens in this deck, so we have a few reanimating spells to bring back those token makers. There were a few cards printed in Shadows Over Innistrad that exiled themselves to create tokens, and they are welcomed with open arms. What would an Innistrad-themed deck be with the clad in black white angel herself, Avacyn, Angel of Hope. This deck has to win somehow, and slamming down Avacyn (or reanimating with something like Unburial Rites) with a board full of tokens just spells the end for the opponent. With her army of tokens, Thalisse, Reverent Medium is poised to overwhelm opponents and haunt their dreams!

Thank you for joining us for this first Innistrad-tacular Cut challenge. I hope all of the deck builders throughout these 2 rounds had a great time. Remember to vote down below for your favorite deck and comment below on what you would’ve done with this challenge.

Speaking of challenges, here are the challenges for the next round of Cut!

Tune in next time for a whole new round of Cut with all new deck builders! Until next time, if you don’t love it, cut it!

If you or a friend are interested in participating in a future Cut article please send an email to the.only.travis.stanley@gmail.com .