Wow! Can you believe this is the 10th article of the CUT series already? Time sure does fly when you’re having fun. I hope to continue writing this series for years to come because seeing the creativity that the deck builders bring, makes my heart beam with joy and all the good feels, and I hope it does yours as well. When I first put forth this series, I wanted to shine a light on more unconventional deck building, and show that maybe the most efficient way to do things isn’t always the “right” choice. I hope to show folks that they have so many different options to spice up their commander decks, or ways to switch up game nights with their playgroups.

Breaking the streamlining of Commander is a lofty goal, but as we all know that’s where it has its roots, big decks played against one another to kill time at events. The next challenges I have coming up are sure to test the brains and deck building prowess of future contestants. As I always put at the end of each article, if you or anyone you know wants to be on this series and take a stab at building a deck following restrictions to really test your deckbuilding skill, send an email to the.only.travis.stanley@gmail.com. I can’t wait to meet and work with more folks in the future and see what they will come up with!

Alright, now on to the main reason why you’re here let’s check out who made it to the second round of CUT #5! 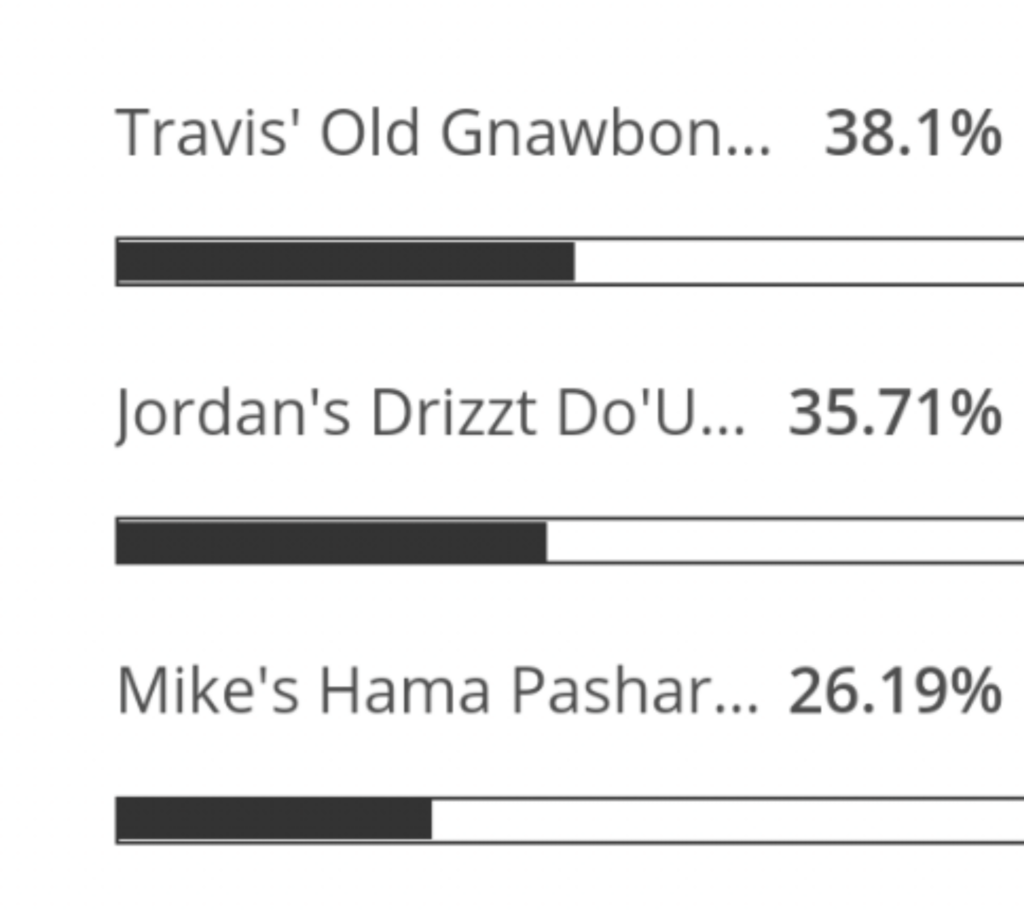 A big thank you to Mike and his Hama Pashar, Ruin Seeker deck, what a great venture it was! Thank you again for being on CUT (again!) and I hope to see you again!

The challenges that were sent to our two finalists were as follows:

* I realize now that there are not officially any Paladin creatures, the challenge still stands.

The first to show off their party is Jordan!

When you told me I had to work with only certain creature types and a rarity restriction, I was largely looking for a commander that worked with cards that, well, aren’t rare or creatures. I found that, largely, in Minn, Wily Illusionist-though I was still agonising over exactly which 15 I was going to play.

By the looks of things, most people are running Minn as Illusion tribal, which I can respect. However, considering the only Illusion I can play in the deck is Jace’s Projection, that was kind of out of the question. Fortunately, Minn is powerful enough to carry a deck on her own, since the power of her tokens grows exponentially, and she can make one every single turn-including those of our opponents, if we support her.

I’m not going to beat around the bush. There are 33 instants in this deck, and most of them say the word “Draw” on them. I deliberately avoided using effects that only draw cards on your own turn, such that we can reliably draw 2 on at least one of our opponent’s turns, two if we’re lucky, 3 if we’re popping off. In addition to these draw effects, we have a handful of counterspells and interaction that suits our plan,as well as everyone’s favourite blue Demonic Tutor, Long-Term Plans.

However, Minn also has another few lines of text, as it turns out, and those are what can really get this train rolling. Most of the time, we’re probably looking to drop a land whenever an Illusion dies, so we can keep up with other decks mana-wise as well as draw-wise, seeing as mono-blue isn’t known for its ramp. But there’s a bunch of permanents that are worth sliding into play as well, Ior Ruin Expedition gives us two cards and a free Illusion for effectively no mana, we’ve got Ghostly Pilferer and Mystic Remora and Rhystic Study to make sure people hate us, and Sensei’s Divining Top looks great when you can drop it in off-turn.

There are also a few cards in this section I’d call “lubricants”, though that term is a little odd when there’s already so many cantrips in the list. Teferi, Master of Time guarantees a minimum of one draw per turn as long as he’s on the battlefield, and both Archmage Emeritus and Lunar Mystic can help turn a single draw into a double and trigger Minn. As well as these, Mordenkainen and Murmuring Mystic both produce extra Illusion tokens, to gum up the board, pump our Minn tokens, or get value off of. This section also includes Sakashima of a Thousand Faces, because doubling down on tokens and triggers seems pretty good, as well as the handful of tutors in the deck. These are the aforementioned Long-Term Plans, Fabricate, and Vedalken Aethermage.

Fabricate is here because it tutors all of our sacrifice outlets, because in Commander you kinda need to make your creatures die rather than let them die. We’ve all played against some of these cards, Spawning Pit, Ashnod’s Altar, and Blasting Station (which does a great Goblin Bombardment impression for a colourless card). Skullclamp is also here, of course, because equipping it is effectively free in this deck, and that’s utterly bonkers.

Vedalken Aethermage is sort of a package deal here, though an admittedly limited one. It finds Murmuring Mystic for tokens, it finds Archmage Emeritus for draw, and it finds Baral, Chief of Compliance for pseudo-ramp. However, it is also pretty great at finding the deck’s win conditions, which we’ll run through now.

The first is just combat damage, which should be obvious. Minn’s tokens get big quick, and can be granted evasion through Tetsuko Umezawa, Fugitive and Archetype of Imagination(hey, it’s a Wizard!),or you can just bounce everything with Perplexing Test,to guarantee a huge chunk of damage to a couple opponents. It only takes 7 illusions before you reach 40+, after all.

The next wincon is a series of loops involving Minn and the old classic, Meloku the Clouded Mirror. Meloku makes Illusions by returning lands to your hand and paying 1, at which point you can sacrifice the Illusion with one of our outlets and put the land back into play untapped, hence, infinite triggers from whatever benefit our outlet gives us. With Ashnod’s, that’s infinite mana, which we can turn into drawing down until we hit Blue Sun’s Zenith. Blasting Station wipes out every opponent with damage, as well as any creatures or planeswalkers that might be giving them the ability to survive infinite face damage.

The final wincon is Thassa’s Oracle, one I’m admittedly less sure about. With Meloku and Murmuring Mystic, though, I know the deck can have some huge turns, so it’s not out of the question that you could just draw your deck the old-fashioned way. That concludes the deck. Thank you for reading, and I hope you enjoyed it.

Thanks Jordan! It is no illusion that your deck comes to play!

And, presenting next is me!

First of all I wasn’t expecting to make it to the finals of this article, so thank you to all you kind folks who voted for me!

I pondered over which commander I’d build a deck around for a while, Prosper, Tome-Bound has been my runaway favourite to play with, but since I have already upgraded his deck, that was the easy way out. There was also, Catti-brie of Mithral Hall, she piqued my interest a little bit, but ultimately I decided on Wulfgar of Icewind Dale. He jumped out at me because, for one, that art, (I think Aleksi Briclot knocked it out of the park!), and for two, mechanically he seemed like he would be really fun to build around.

After I decided on my commander my first steps were deciding which creatures I would have in my deck. Well, to my surprise the challenge was exactly that, challenging. Turns out, a lot of the cards that work with Wulfgar are warriors, and what creature type isn’t listed as part of the challenge? You guessed it.

Making due, I fit in as many synergistic creatures in the deck that I possibly could, keeping in mind the rarity restriction as well. Arbor Elf, and his other mana-dork friends, are key in making sure this deck starts fast. Spending rare slots for cards like Beast Whisperer and Vizier of the Menagerie allowed me to make sure I kept up on the card advantage. Monastery Swiftspear is sneaky good in this deck, considering 37 cards are non-creature spells, it can get very big and swing in for a bunch of damage. As I mentioned before there weren’t a lot of creatures to capitalize off of Wulfgar’s ability, Dreadhorde Arcanist, Wildfire Eternal and Robber of the Rich were my best options.

To help out with ramping us to our awesome creatures we have the staples: Arcane Signet, Commander’s Sphere, Gruul Signet, Rampant Growth and Cultivate. The worst feeling is seeing your awesome creatures destroyed before you have had a chance to attack, triggering Wulfgar. No fear, packed in this deck are various haste enablers like Fires of Yavimaya, First Day of Class, Samut, Tyrant Smasher and Sarkhan Vol. If those don’t work out, there is a little bit of protection with cards like Blossoming Defense and Wrap in Vigor. Doesn’t quite protect them from board wipes or removal, Dolmen Gate allows creatures to attack without fear from potential deathtouch-y blockers.

How does this deck win? Good question reader. There are a few creatures that come down and make an impact right away like Earthshaker Giant and Kamahl, Heart of Krosa. Otherwise this deck looks to work through continued smashing of opponents. With multiple ways to give double strike, Temur Battle Rage, Cleaver Riot, Embercleave creatures will be sure to be coming in swinging. I was going to say that a card I think will do lots of work in this deck will be Trepanation Blade, but I also think the versatility of Vastwood Surge will also see it’s fair share as key component to this deck’s success.

Wulfgar of Icewind Dale is a very fun commander all in all. Having his melee ability really helps out if none of the other permanents have anything to do on attack. This was a fun challenge, and maybe in the future I’ll step in again. Until then, thanks for reading!

Minn, Wily Illusionist vs Wulfgar of Icewind Dale, who will come out on top? That’s what you get to decide. Make sure you vote for your favourite down below!

As for next time, here are the challenge’s our next deck builders will face! Keep an eye out for that one, we have some really fun guests lined up!

Remember if you don’t love it, cut it!