As Foretold | Illustrated by Tommy Arnold

We've had two Double Masters sets now and there hasn't been a reprint of Doubling Cube, Spark Double or heck, even Double Vision (yes I know that one got printed in the New Capenna Commander decks, but still). There really is no excuse for the other two to put it quite plainly. Doubling Cube is a Commander card through and through and - excluding The List - hasn't been printed since... Tenth Edition?!

That's far too long to go without a reprint for a card that fun.

Its price is now a little more than the average player would like to pay, and even though it's on "The List" it is still rare and hard to come by. Hopefully we will see it soon, but this would have been a great spot to put it. Turning our gaze to a more recently released card in Spark Double, it sees lots of play in all sorts of decks in EDH, and it's starting to climb in its price point as well. Being able to copy planeswalkers and creatures makes this card incredibly covetable by all sorts of players.

I'm just saying, if it were in 2X2, I wouldn't feel bad opening it as one of my rares. If there is a third Double Masters (which would be a tad bit of a flavour fail, unless they switched the name to "Triple Masters" or "Masters Cubed"...which would be a cool name for a Cube-Draft Masters box set...you're welcome Wizards, that one's on the house) I do hope to see those cards and hopefully another reprint of Doubling Season because we all know that card needs reprinting on the double!

Last time we had three deck builders double-down and try to get your votes to secure themselves in the finals. Only two may make it to this article let's see who did: 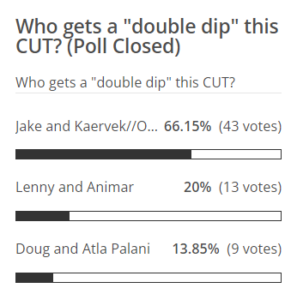 Congratulations Jake FitzSimons and Lenny! Both of you get to be in two articles in a row! As always a big thank you to Doug, even though you came up short on your second appearance it was great to see you and have you on. I really enjoyed your Atla Palani, Nest Tender deck, ain't no better way to cook some eggs than with some burn spells!

The challenges our finalists had to face were:

First up we have Lenny! Take two, action!

Round 2 of the Double Masters challenge was both more difficult and much easier. Using only cards from the Double Masters sets meant a much smaller card pool and fewer available strategies. Fortunately having to use my last commander turned out to be a blessing. The original Double Masters had a strong artifact theme and in general, artifacts tend to be popular choices for reprints as they show up in many formats and Animar, Soul of Elements is not only in great colors for this strategy, but its ability can make many artifact creatures completely free to cast. The ten cards of mana value two worked out quite well for this deck, giving me an excuse to use cards I normally wouldn't such as Cyclonic Rift, Mana Drain, and Dockside Extortionist as well as cheap mana dorks to ramp and put counters on Animar.

This ended up being more like a classic Animar deck, using cheap creatures to put counters on the commander, reducing the cost of much more powerful creatures down the line. In addition to the previously mentioned mana dorks, I added as much as I could in the way of utility creatures. Spellskite is a great way to keep spot removal away from the commander. Fierce Empath and Treasure Mage find the top end creatures. Consecrated Sphinx and Jhoira, Weatherlight Captain help out with card draw. Venser, Shaper Savant and Duplicant deal with problems, while Eternal Witness and Myr Retriever get back cards that meet an unfortunate end.

Once Animar has a decent number of counters, it's time to start resolving threats. Since they were available I went with Animar classics like Blightsteel Colossus, Ulamog, the Infinite Gyre and Kozilek, Butcher of Truth. Hydroid Krasis is not only a flying trampler that can draw cards, but it also adds to the count of two mana value cards.

Bosh, Iron Golem can turn our expensive artifacts into extra damage or spot removal. Avenger of Zendikar and Myr Battlesphere can flood the board with chump blockers. Of course we don't want to neglect the fact that Animar is likely to get pretty big, I also threw in O-Naginata and Rancor for some evasion and extra power.

As much of a fan as I am of the combat step I took the opportunity to include a backup combo. Nim Deathmantle just so happens to fill one of the deck restrictions being two mana and wouldn't you know, they went and reprinted Phyrexian Altar in Double Masters 2022. With both these cards and either Avenger of Zendikar, Myr Battlesphere, or likely Dockside Extortionist you can make infinite mana and sink that into a Walking Ballista, Bosh, Iron Golem, or Golem Artisan to win the game; or you can use Hissing Iguanar to burn the other players out of the game.

I hope you enjoyed the deck. It's a classic take on the Animar deck and I think it really shows off just how many cool commander staples get reprinted in these sets. Thanks again to Travis for having me back and thanks to all of you who voted for me in round one and hopefully this round

Thanks Lenny! It was a real blast having you on. That brings us to Jake FitzSimons, let's see how he doubled down on his previous commander!

I've come back for seconds.

And if I thought "modern legal" was a tough restriction (I did) then I didn't realise how good I had it. "Cards must come from Double Masters 1 &amp; 2" is a bizarrely small pool to draw from, but I'm proud of what I came up with.

Rather than try to rejig the double damage theme I ran with last week (RIP Obosh) I've started from scratch and taken the deck in a new direction: artifact aristocrats, or artifactocrats if you prefer. Or at least, that's how it started and once I realised that was the exact Rakdos draft theme for Double Masters 1, I looked further afield.

Kaervek's Artifactocrats is full of expendable artifacts that will likely make their way to the bin and back again more than once. Taking advantage of this are our modest host of artifact centric payoffs. Disciple of the Vault is the best of these and Imperial Recruiter and Imperial Seal have been included specifically to find it. Ovalchase Daredevil doesn't look like much, but she's a big help for the deck's subtheme: equipment.

If there's one thing Double Masters has in abundance, it's high quality equipment. I've chosen all five swords available to me, because how could I resist? It wouldn't be very merciless of me to leave one out. I haven't stopped there either.

Sculpting Steel and Masterwork of Ingenuity are simple force multiplies and a way to double up on the best of what's already on the board, but Basilisk Collar is special as the first card I've mentioned that shares any amount of synergy with Kaervek. A lifelinking Kaervek is an even bigger threat than a regular one, but you can't play a seven mana Rakdos punisher commander and worry about looking like a threat. You've gotta lean into it, you've gotta be the Bolas.

Once the early game has passed and the miniature pings and dings that the aristocrat side of the deck is capable of have lost relevance, you're going to need finishers. Threats that demand a response. Kaervek is one of those for sure, but he'll take a while to accrue enough damage to really be a game ender. Better yet are the terrible trio, Ulamog, Kozilek, and the most fearsome of all eldrazi... Blightsteel Colossus. Damnit Sheldon, let Emrakul off the banlist!

Do these cards have any special or interesting synergy with the deck? Not really. But when you're working with a manabase composed almost entirely of basics and none of the usual ramp tools, you make do with what you've got. More than that, I'm a simple cEDH enthusiast. I see fast mana, I click "add to deck". Self control isn't my strong point and if it was, I wouldn't love Rakdos decks half as much as I do.

Speaking of cEDH, I've also made room for a simple infinite combo. Dualcaster Mage and either of Twinflame or Heat Shimmer is an easy "I win" button that you can start gunning for if all else fails. If you want a more detailed explanation for how this combo works, check out this explainer at Commander Spellbook. Like the fast mana above, this lacks strict synergy with the rest of the deck, but I can't help but love that someone drafting Double Masters could put together an infinite. Hey, if it's okay in limited, it has to be okay here!

You might notice this deck is being pulled in three different directions and "artifactocrats" should probably be "aritfactoequipmenteldrazocrats", but such is the nature of a tiny cardpool. If anything, it was actually a lot of fun being forced to diversify my deck building rather than honing in on just one or two primary strategies.

Thanks again for having me Travis, well played to Doug and his Atla Palani, Nest Tender deck, and good luck to my CUT archnemesis Lenny Wooley!

What kind words to your competitors Jake! It was a pleasure having you on once again. Best of luck to you and Lenny in this round.

You know what to do now, vote below who you think won this finals round! Next time we bring in 3 past winners in the CUT roster to go head-to-head to see who can prove themselves to be the best of the best. So check back next time to see who won the Double Masters 2022 round and who is next up on CUT Remember if you don't love it, CUT it!

Beyond Rule Zero: The Anatomy of a Good Event

The Problem With Judging