The world outside whizzes by as I sit by the fire and sink into my favorite book, “The Halo that Got Away” by a very well known member of the Brokers gang. Suddenly there was a tapping, which quickly turned into a beating on my front door. Placing the bookmark delicately back into the book, I head to the ferocious sounds emitting from the entryway. “I’m coming, I’m coming,” doing my best to reassure the apparent urgency. To my surprise, it was a small boy with a cap and a note. Hurriedly he placed the note in my hand and scampered back down into the sea of people. The letter just had three simple letters: “CUT”. I thought I was done with the game, but it seems the game wasn’t done with me…

Welcome to CUT #12 Finals, where we find out who made it to this round by your votes!

Here are the results from the prior round: 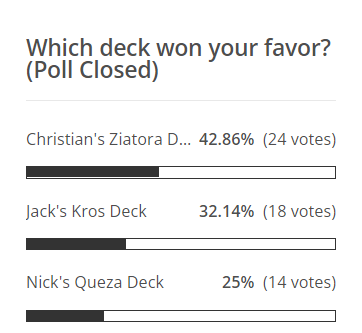 Looks like Jack and Christian made it to the Finals! Congratulations! A big thank you to Nick and his contribution, Queza, Augur of Agonies, it was the opposite of its namesake and was a pleasure to read. Heck, after reading it, I'm tempted to build my own Queza deck! It was great having you on, and I hope to see you again in the future. If anyone wants to learn more about Queza, check out Wes Stuckey's latest piece!

Unfortunately Christian wasn’t able to contribute to this week's CUT, so I will fill in and do my best to make him proud with a creation of my own!

Our deckbuilders have had their hands full with these challenges, and speaking of challenges, this time around they were:

First up we have Jack; let’s see what he brought to the table!

Good day to you! I’m so excited that I got to move on to the final round of CUT, I hope y’all like the deck that I brewed.

Syrix, Carrier of the Flame

The Naya/Cabaretti legends have certainly garnered a lot of discussion, and The Beamtown Bullies stirred up a lot of dust, but I hadn’t seen much hype over the Esper/Obscura legends. I personally think this is something of a travesty since the color identity is being pushed in a direction that it really hasn’t explored before: combat. Of the possible choices, and given the constrictions, one legend piqued my interest enough to solidify him as the commander of the deck that I brewed:

I like how this guy functions: he’s focused on combat, but at the same time, he’s a Sphinx, so he’s gotta make it unique and weird. The fact that he also includes voting only served to heighten his appeal.

This may make for a less-than-interesting read, but this deck largely built itself based on the following Scryfall searches:

All in all, I’m pretty happy with how the deck turned out. In a lovely bit of serendipity, a fair number of the voting cards trigger on ETB, so your blink/flicker effects have more targets than just Tivit.

Lemme know what you think of the deck; I hope you like it!

Thank you Jack! Lastly here is my entry into this week's CUT.

It’s been a little while since I had to step into the ring myself and tackle these challenges I give to so many others. This week I went with (what was Christian’s original pick) Henzie "Toolbox" Torre!

As Christian was telling me he couldn’t do that article this week, he gave me his idea for the deck he wanted to make: a Ball Lightning tribal deck, so in his stead I tried to do exactly that. I almost immediately ran into a problem: I found they didn’t quite synergize with Henzie due to their mana value. Ball Lightning is a three-mana-value creature, meaning it misses out on Henzie’s Blitz-granting ability. Despite that, I included as many of those cards as I could find, like Groundbreaker, Hell’s Thunder, and Lightning Skelemental. Fortunately I was able to find a few of those cards that do meet the requirements for Henzie’s ability and are able to have a little more value squeezed out of them, like Blistering Firecat and Skizzik.

Speaking of value, sacrificing and getting the biggest bang for your buck is what Jund (or in this case, the Riveteers) does best! Big daddy Korvold, Fae-Cursed King is in the deck to reap the sweet, sweet rewards of jamming out a bunch of Blitzed creatures. Skullclamp, Pitiless Plunderer, and Dragon Appeasement all reward you for sacrificing creatures, and Viscera Seer is here to help along the sacrifice plan. Before they get sacrificed to the Blitz clause, the aforementioned Seer and Greater Good will allow you to dispose of those creatures who are just going to die anyway, allowing you to wring every last bit of value out of those creatures. Scarland Thrinax is a sacrifice value piece as well, by growing itself by eating the Blitzed creatures, unfortunately the timing with this card can get a little weird and wonky, be warned.

With all of this death and sacrifice going on, you know that this is a party that Juri, Master of the Revue and Mayhem Devil are not going to miss. Blood Artist, Poison-Tip Archer, and Bastion of Remembrance are usually better-suited to an aristocrat-style deck, but they do a surprising amount of work; even when it's only two to three life a turn, that'll add up over time.

Rounding out the deck, we have cards that I like to call “graveyard reclaimers”; the purpose of these are to grab creatures from your graveyard and place them back into your hand, or better yet back onto the battlefield. An innocuous uncommon from Oath of the Gatewatch, Baloth Null, allows you to grab back two creatures from the graveyard, so that you can Blitz them out again or redeploy them in the the traditional casting fashion, but where's the fun in that? The same can be said about Deadwood Treefolk giving you a creature back on entry and on exiting the battlefield. Phyrexian Reclamation is an all-star in any deck looking to reuse the graveyard. A one-shot card like Victimize is always welcome, a true two-for-one that works in your favor.

Henzie "Toolbox" Torre I found very fun and easy to build, and if it wasn’t for the challenges I would’ve probably built it very differently, but hey, that’s kinda the point of this series. Hopefully I fulfilled some of Christian's vision with this creation; I know I had a blast building it regardless. As you can see, the rest of this deck is filled with value creatures that do something when they enter/leave. Fun fact: if you are able to cast Henzie more than four times, Solemn Simulacrum becomes a free Blitzed creature, and that to me is good clean Blitzing.

Hanging my coat back on the coat rack, I sit back down and open my book back to where I left it. The fire had gone out long ago, but the heat remained, as if to welcome me back home. As I sink deeper into the pages of this wonderful novel, I am reminded of times where life wasn’t this easy, where the streets decided whether or not you were done. I pull a small flask out of my pocket and sip the magical liquid contained inside, a prize for leaving my book and fire. I stare outside, thinking about this city, these people, that all work to make things happen.

As the sun sets on the Streets of New Capenna, let's all take a minute to really soak in what this set has brought us. These crime families and their Demon leaders have given us some really interesting cards to use in all of our decks, and some ideas for new decks to build. I hope these sets of articles have given you all some ideas, or sparked something new in seeing these creations. Remember to vote below and choose who you think won this round of CUT!*

When deckbuilding you next deck take my advice, if you don’t love it, CUT it!

*Christian wasn’t able to participate and get the chance that he deserves, so I just hope I did him justice with my creation.