All throughout Kamigawa: Neon Dynasty’s release, I’ve been listening to the album that accompanied it (you can give it a listen here). There are some songs that really slap, and others that I don’t resonate with as much. Overall though, I feel that the tone and mood of the music fits the new Kamigawa quite nicely. The songs “Argon Reflection” and “And We Glow” have been on repeat for me. Makes for some really good workout/writing music that’s for sure.

The neon lights permeate through the dust as it settles, standing now are 2 finalists.

Last time we saw three very different takes on the legends from Kamigawa: Neon Dynasty. They were all fantastic, but unfortunately only 2 make it through and one has to be cut.

You voted and the results were: 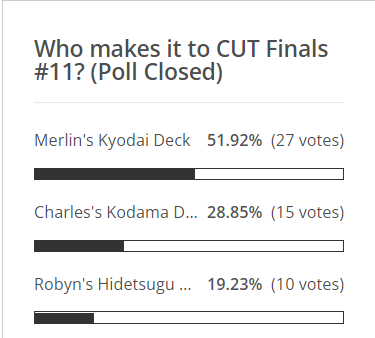 Congratulations, Merlin and Charles! You made it the final article for this round. Thank you to Robyn for feeding us a delicious deck with Hidetsugu, Devouring Chaos; as you have seen before, redemption is possible here on CUT. Thank you again for appearing on CUT, and we hope to see you again!

Now for this round, our finalists had to face these challenges:

Let’s see what they brought!

First up is Merlin!

Alright, I made it to the next round… Now it’s time to catch Lightning Bolt in a bottle… AGAIN?!

This challenge was definitely a lot harder for me. While I thought last round’s restriction to Modern legality was limiting, maxing out at 10 rares/mythics was a whole different beast. I thought about cheesing this restriction and adding some timeshifted cards appearing in my scryfall search, but ultimately decided that wouldn’t be in the spirit of CUT. Similarly, I decided against a mono-green Samurai deck consisting of my favourite Elf/Dragon/Dinosaur, Chameleon Colossus and its ilk to circumvent the creature type restriction. So, I instead mulled over the available legendaries. First, I pondered an Equipment deck with Raff Capashen, Ship’s Mage to flash auto-equip Equipment onto Samurai; however, that deck seemed a little too straightforward for the incredibly intelligent and very good-looking readers of Commander’s Herald 😉.

The next potential general that caught my eye was Chishiro, the Shattered Blade. I read “Whenever an Aura or Equipment enters the battlefield“ and instantly asked myself “What even is an Aura?”. So, I went through the types of Auras I knew; “enchant creature”, Curses and… “enchant lands”! An approach worthy of CUT! I will enchant my mana base to get the little Spirit friends. But how will I get the second clause on Chishiro “At the beginning of your end step, put a +1/+1 counter on each modified creature you control.” to work? Easy: the enchanted lands can also be creatures! There are a few ways to achieve this:

The first approach is best achieved by targeting Darksteel Citadel or Slagwoods Bridge, since we’ll get an indestructible beater. Similarly, we can fortify a land with Darksteel Garrison for a similar effect (sadly, that doesn’t make the land modified). Ways to animate are enchantments, like Living Terrain and the Zendikons (Nissa’s Zendikon and Crusher Zendikon) as well as a few sorceries, like the Awaken spells.

Only animating lands for a turn comes with one big upside: it lets us play board wipes that allow us to get our plan set up. Since Chishiro is Gruul, the deck packs damage-based classics, like Savage Twister, to keep the board clear while our lands aren’t animated and then swing in. Soilshaper was a great find among the Spirits to help here (even though it also dies to board wipes). Soilshaper also led me to pack Arcane/Spirit-synergies into the deck. Similarly to the other cards in the “Will”-cycle, Kamahl’s Will can heavily swing a game in our favour.

Raging Ravine is a creature land that grows itself to become modified, Lair of the Hydra is flexible in size, and opponents must think twice before blocking Frostwalk Bastion. A fun and concise win con (if the pod is open to it) is Inkmoth Nexus; it can one-shot people with Infect damage if it’s targeted by Awakening of Vitu-Ghazi.

The deck fits nicely with other thematic builds, where it takes until turn 4 or 5 to get rolling, or it can catch up with a board wipe. If opponents try to pillowfort with Ghostly Prison effects, there’s always a Fireball in the list to eventually burn them out. I imagine Chishiro struggles against life gain stratgies, but at least the lands don’t trigger the “soul sisters”. Also, if the pod is filled with too heavily optimised decks, opponents might have an easier time exploiting your lands being creatures. To quote the Bard in the Scottish Play, “Charles shall never vanquished be, until Inkmoth Nexus to high Dunsinane hill shall come against him.”

Merlin is looking mighty deadly with his enchanted lands; now let’s see what Charles brought to the finals!

Hey folks, really stoked with how well my list went in the last round and I am back with another spicy brew, but first let me regale you with a story of how I ended up on this list.

With the fairly strict challenges this round, I initially decided on a boring Gruul Auras list that had a fairly straightforward buildup. That went into the bin very quickly when I discovered that a certain Khans of Tarkir legendary was a Monk!

The only option with the right color identity was Go-Shintai of Life’s Origin. “But Charles, that’s a Shrine commander, and you won’t be able to run the new creature Shrines from Kamigawa: Neon Dynasty!” When is a gift not a gift? We don’t need any other creatures where we’re going!

We have a few ways to seek Narset, Enlightened Master; namely, Divergent Transformations, Reality Scramble, Reweave, Selvala’s Stampede, and Synthetic Destiny. I’ve reduced the disappointing enchantment hits off these polymorph effects, with the least exciting hits being the white- and red-colored Shrines. With Narset in play, you can quickly assemble a large collection of Shrines and have an action-packed upkeep step.

Keep in mind that the specific wording is different between the different options: Selvala’s Stampede allows you to put permanents from your hand onto the battlefield, while Reweave and Reality Scramble allows you to flip until you reveal a card with a shared card type (creature OR enchantment when Go-Shintai’s tokens are targeted).

PSA: Some anti-synergy exists in the deck in the form of Sterling Grove giving our enchantment tokens Shroud. Make sure you clear it out before using the targeted Polymorph-type effects.

“What if our token-generating commander is removed?” I hear you say. The backup token-generator options I’ve chosen are Honden of Life’s Web and Saheeli, Sublime Artificer. Unfortunately, Saheeli’s tokens are artifacts, so avoid casting Reality Scramble and Reweave on them, but they’re sublime with Synthetic Destiny.

I’ve chosen three main card advantage engines: Shrines, like Honden of Seeing Winds and Sanctum of Calm Waters; Skullclamp; and Whirlwind of Thought. All four options stay on the battlefield after a creature board wipe and work well with our tokens and our mostly noncreature deck. Keep your hand full and your opponents in the dark on what they need to vote for when Selvala’s Stampede comes down.

With Reality Scramble, we can transform our measly 1/1 colorless Shrine enchantment tokens into Cinderellas with just four mana and a land. Hopefully with blind luck they’ll become a Sanctum of All, but why leave things to chance? Enlightened Tutor and Sterling Grove both drop off an Omniscience conveniently to the top of your library.

Alternatively, if there’s a juicy target in the graveyard, Reclaim and Noxious Revival help them re-enter the battlefield. They serve double duty since Narset doesn’t force us to shuffle, allowing us to stack our deck to control what we flip into. This deck has so much card advantage that the downside of “top of your library” isn’t much of an issue.

Emergent Ultimatum is one of the more interesting thought puzzles in the deck. If you manage to cast it in a fair way, you can select a pile of Enlightened Tutor, Omniscience and Selvala’s Stampede. No matter the card that gets shuffled into your library, you’ll end up slamming a fat 10-mana game-changing value enchantment into play and taking the mantle of archenemy. To play some 4D chess, you could even choose Omniscience and any two mono-colored cards you definitely want to cast.

Through sheer determination and a lot of luck, you might find yourself in a state of bliss and Omniscience. With the handy Petals of Insight, you’ll be able to dig to the Whirlwind of Thought and hopefully a Sensei’s Divining Top along the way. With the top, you can cast it for free, draw one, activate the top, draw one, put Top on top and cast one of the two new cards to draw the Top to keep churning.

Next, play out your entire entourage of Shrines. Your opponents will each discard dozens of cards on your upkeep before their untimely death through a barrage of Stone Fangs and (metaphorical) Infinite Rage.

Since we’re running so many slow lands, I’ve included a variety of removal and interaction. Wear Away’s inclusion in the deck is just so you have the very fringe option of splicing Reweave onto it for additional value. Some also serve double duty for when we’re ready to cast everything for free. Chain of Vapor can be cast and copied on all your enchantments for a second casting when Whirlwind of Thought is on the battlefield while Clutch of the Undercity can fetch our Reality Scramble or Whirlwind of Thought.

Thank you for voting for my spicy brews and I hope you had fun reading about my favorite Monk journeying to Kamigawa in the search for enlightenment and then slowly becoming some Shrine-building maniac that knows everything.

Thank you Charles! A secret Narset deck hidden inside a Go-Shintai enchantment/Shrine deck? Very flavourful, I like it.

As always, I want to thank the both of you for your great decks! Kamigawa is one of my favourite planes, and unfortunately it feels like we are leaving it far too soon. Soak in these decks and maybe they’ll inspire you to build something with these awesome cards before they fade away in our rear view mirrors. Next CUT challenge will be themed around Streets of New Capenna! I can’t wait to see what decks come out of that!

Remember to vote below for your favourite deck! As always, if you don’t love it, CUT it!