Back in April the EDH world had a bit of a controversial moment when a line from the Professor at Tolarian Community College began making the rounds. While guesting on cEDH Brasil's YouTube channel, the Prof said "I personally feel that cEDH is the future of Commander."

After the video was first posted, things ran a little hot from both sides of the aisle. Some excited to have their preferred playstyle validated cackled gleefully about the Prof's words. Conversely some were upset at the notion their preferred playstyle might be going away. I wanted to give this a little time to cool off before I jumped in . . . but I'm still going to jump in.

Because I don't think cEDH is the future of Commander.

First, let me make it clear this isn't going to be an article bashing cEDH. I fully admit to having had moments in the past where my language has been less than productive when addressing the spikiest tip of our format. This is not that. There's absolutely nothing wrong with playing the game the way you want to play it, as long as everyone you're playing with is on the same page. If that takes the form of smashing a Craw Wurm into a Scaled Wurm, great. If it's casting Demonic Consultation into Thassa's Oracle, then that's great too. As long as everyone is roughly in agreement about the way you're playing, then get your game on.

Instead, I want to look at what the Professor actually said, and analyze why it doesn't make any sense.

1. Magic players are naturally competitive, and the people who say they want a casual format are loud but small

Statistically that's utterly untrue. As recently as January of 2021, Mark Rosewater on his tumblr stated the following:

"Play with what I own surpasses any format by a large margin. For example, less than 1 in 10 has ever played a sanctioned event. My guess is the majority of Magic players don't know what a "format" is."

We also have stats from the two CommandFest Online events in 2020 that show the power breakdown groups. The ChannelFireball Events Twitter account tweeted out the results, and you can find the actual tweet here. For simplicity's sake here's the breakdown: 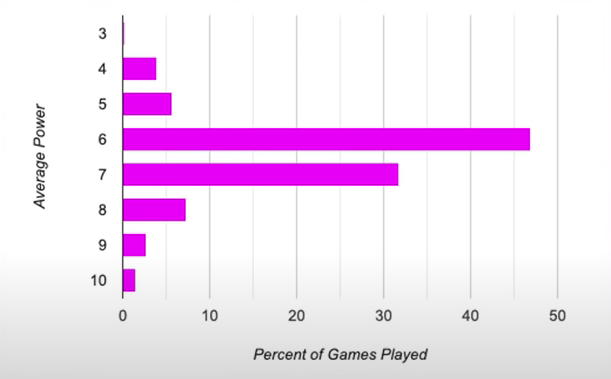 You'll note the amount of 9 and 10 power decks where cEDH resides combine for less games than those played at 4 power, or pre-con status. And this is at an organized event that should be biased towards more engaged players.

People who want aren't loud but small; they're statistically the largest segment of the format, and by magnitudes.

2. Magic is a competitive game

This assumes a very binary way of thinking that almost never plays out in reality. Want proof? Look around at literally everything you do in your life that involves competition. Let's take my life from the last week for example:

I went and shot a round a golf with my brother-in-law. Golf is of course a competitive sport. And yep, I've worked to optimize my golf game over the years. For example, I re-gripped my clubs when the rubber got slick and worn. Each spring before my first game I hit the driving range and pound a bucket or two of balls to get the feel for swinging a club again. And in my youth I took golf lessons a couple of summers.

And that's where it ended.

I don't go out and practice my golf game each and every day. I don't study my swing to find any flaws, or scout out the course in advance to plan out my approach shots. The golf shoes I wear? I snagged them from my dad when he died, and they're probably half a size too narrow. I want to beat my opponent, but there are limits to what I'm going to do in order to achieve that.

That's not to say some people don't push their boundaries further than average; some people take their golf game very seriously. Some take it seriously that they get paid millions of dollars to play it. But that's not everyone. It's not the majority. It's certainly not "the future of golf."

You can apply that to almost everything in your life. I've started custom maps in League of Legends to practice using Caitlin's 90 Caliber net ability to escape over walls, but I've never paid someone to coach me. Each expansion in World of Warcraft I figure out the most efficient DOT rotation on my warlock to maximize how much damage I do, but I don't end-game raid. I've read a book or two about chess, but I don't play out mental games on the ceiling in an attempt to find meaning in an otherwise vacuous existence.

We're supposed to think that while there's optimization limits where people are satisfied and stop in any other competitive endeavor, people won't stop when it comes to Commander. There's almost no aspect of life where anything works that way, and there's no reason to think it works that way here.

3. Competitive games move towards optimization because everyone wants to beat their opponent

Yes, Commander decks have gotten more optimized and stronger over the years, but there's no reason to think that's an infinite trend. It's much more likely to be the re-gripping your club and hitting a practice bucket of balls phase of our game. I don't have to look any further than my own decks to see some examples. I would say on average I'm more engaged than most Commander players. After all, I put out several hours of EDH content a week, and write for a couple of websites as well as tweet way too often. Over the course of 2020 I tracked all the changes to my decks, and this is what the final CMC changes looked like:

The CMC of my decks on average went up by 3.9 mana over the course of the year 2020. For the curious, my best guess as to why that is are the following reasons:

I'm not going to claim this applies to everyone of course. I'm just illustrating that even for people like myself there's a hard cap on how far we've interested in pushing optimization. And that cap falls well short of cEDH.

The future of EDH looks a lot like the present

None of this should be construed as to say cEDH won't grow more popular. It may, that's great news for everyone who likes playing at that power level. There is however simply no reason to believe it is somehow the future of Commander. The future of Commander more than likely looks a whole lot like the present, and that means the vast majority of people playing suboptimal, sub-cEDH decks.

I'd love to hear your thoughts on this however. Sound off in the comments below and share your opinions, and thanks for reading.

Dana is one of the hosts of the EDHRECast and the CMDR Central podcasts. He lives in Eau Claire, WI with his wife and son where he has been playing Magic so long he once traded away an Underground Sea for a Nightmare, and was so pleased with the deal he declined a trade-back the following week. He also smells like cotton candy and sunsets.

What If? - How A Change To Hybrid Mana Would Impact cEDH