Hello, Sheepwave here! While many of you may know me for my presence as an artist on Twitter, this article series focuses on playing EDH decks that are not legal according to the official rules, but with a bit of talking, can be played via use of the wonderful Rule Zero. In addition to discussing how one might play a "Rule Zero" deck, I will also examine both why you might do so, and how you can maximize your chances that your playgroup agrees and has a fun time. Welcome to Breaking the Rules!

Heroes of the Realm Cards

Wizards of the Coast has a special set of cards rewarded to some employees called Heroes of the Realm. These cards do not have a normal magic card back and are not legal in any format. Heroes of the Realm cards are a strange set-- while lots of them are interesting, many of them are physically impossible to play to a degree that not even silver border cards are, such as transforming into a card from a completely different card game. Others are hideously overpowered to degrees it is difficult to even believe. The fact that none of them went through Magic R&D shows when you look through them. Technically, for people whom a HotR card was gifted to in an official capacity and whose name is on the card, Heroes of the Realm cards are legal in Commander, but this is more relevant as trivia than for actual discussion.

With the release of Adventures in the Forgotten Realms, one card in particular from this set has caught my eye as a fantastic way to combine themes both in AFR and another recent standard set, and that card is the card that was given to celebrate Dungeons & Dragons 5e, the Dungeon Master. For making a deck focused around die rolling, roleplaying, presenting hard choices to players, and of course, venturing into the dungeon, this Planeswalker is absolutely perfect as general. 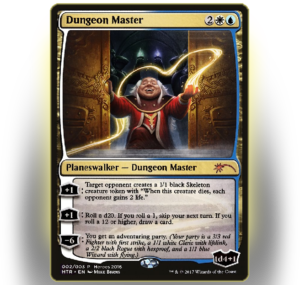 This comes with a problem-- You do not own this card. Nobody who ever reads this will ever own this card. Only four copies of this card even exist. However, I've never let EDH cards being impossible to reasonably gain access to for the vast majority of players stop me before and I'm not starting now. Sharpie a basic, commission an artist to make a textless token for it, or use a digital image on your phone. All that matters is that everyone agrees what the card in your command zone actually does. So, what does Dungeon Master do? 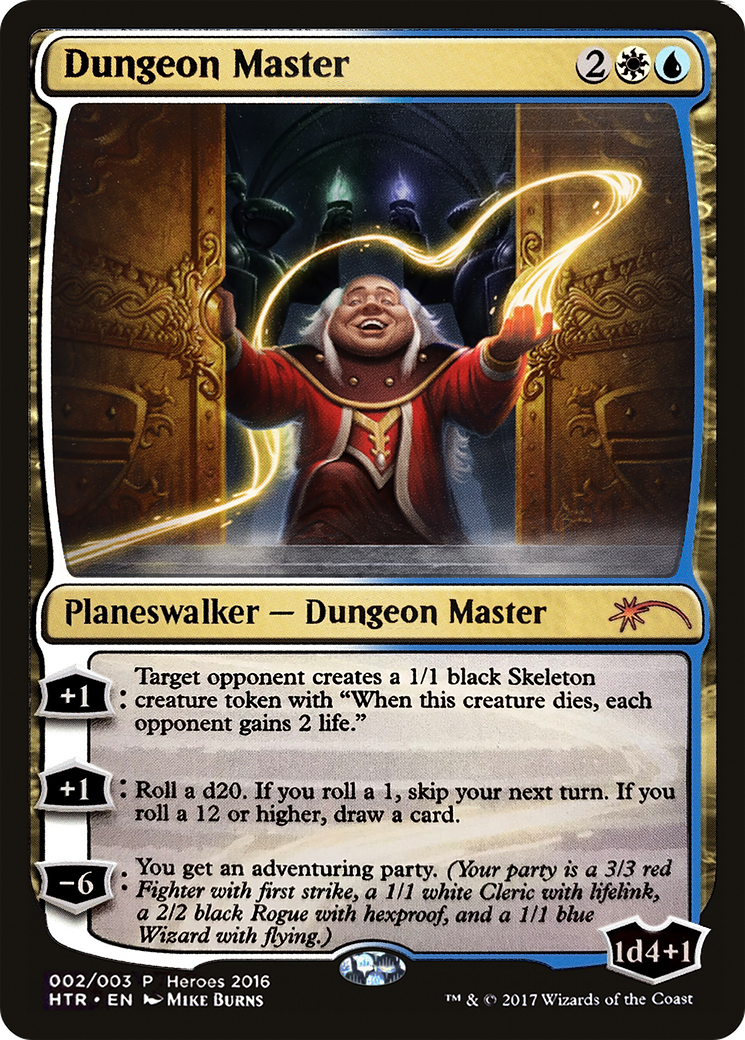 The Dungeon Master is a strange card-- a planeswalker whose starting loyalty is determined by rolling a D4 and adding 1!

He has two +1 abilities; one gives your opponents skeletons that you can gain life by defeating, and the other is a card draw ability that risks skipping a turn if you roll a natural 1!

his ultimate at -6 creates a full party of creature tokens with powerful and relevant abilities. Since 'Fighter' is not an actual creature type in Magic, I am choosing to fudge this text slightly and have it make a warrior instead, in order to remain compatible with the party mechanic from Zendikar Rising.

This suite of abilities is absolutely perfect for a deck that focuses on the flavor of playing a game of Dungeons and Dragons and collaborative storytelling through gameplay.

Time to Venture and roll dice! Cards like Yuan-Ti Malison, Midnight Pathlighter and Nadaar, Selfless Paladin are constant value engines, letting you advance down whichever of the three dungeons best suits your plans. Pixie Guide gives us more options on all of our die rolls, including the one that determines our commander's starting loyalty.

For card advantage, things like Fact or Fiction and similar cards let you present interesting choices to other players to stay on the Dungeon Master theme while still gaining advantage. Flumph provides a ton of card advantage if you can get your fellow players to attack it, as well as being a solid flying defender to keep your commander safe. Contact Other Plane is a very fun variant of 4 mana instant draw 2 that stays on flavor and involves die rolling.

Since our commander can make an entire party all by himself, no reason not to run with the theme! Payoffs like Nimble Trapfinder and Spoils of Adventure tack upside onto the venture creatures we want to be playing anyway. Mirror Entity can turn a board of any 4 creatures into a full party by itself, and acts as a manasink to buff a board of small creatures into a lethal force!

Additional notable cards include the modal "You" cards- You Come to a River and You Hear Something on Watch may not be Cryptic Command, but having any flexibility is great, and modal spells at this low a mana cost are fantastic. I expect them to see play in far more than just themed decks like this! Finally, I decided to get my hands on the only other card in magic the Dungeon Master appears on: Secret Lair Commander's Sphere.

If you decide to go silver border, there are some extremely spicy includes that synergize well with Dungeon Master- Sword of Dungeons & Dragons is a pure and obvious flavor win. Wall of Fortune and Krark's Thumb provide a lot of ability to fudge die rolls as any good DM already secretly does. Finally, Steel Squirrel is genuinely ridiculous when you are rolling d20s, and I have seen it swing in for 33 damage on turn 5.

Dungeon Master is one of the less broken Heroes of the Realm cards, but is still not a card that was ever playtested and not everyone likes playing against Planeswalkers as commanders in the first place. To keep the same Dungeons & Dragons theme deck running, Hama Pashar, Ruin Seeker or Linvala, Shield of Sea Gate could each be swapped from the 99 into the command zone for a completely legal deck . You could also have a blink commander like Brago, King Eternal on hand to play into the many ETB effects the deck happens to run to trigger its part, die rolling and dungeon venturing in the first place.

This deck is definitely more on the low power end; better suited to playing with a group you know pretty well than strangers. There are other directions I chose not to go with the deck-- Nothing in my build takes particular advantage of the ability that gives opponents skeleton tokens or a subtle lifegain theme in the deck, for example. You could also try building it as a 4 color deck (representing the four player party created by the ultimate) and focusing PURELY on venture if you chose! How would you build this deck, and are there other Heroes of the Realm cards you want to see? Let me know!