Hello, Sheepwave here! While many of you may know me for my presence as an artist on Twitter, this article series focuses on playing EDH decks that are not legal according to the official rules, but with a bit of talking, can be played via use of the wonderful Rule Zero. In addition to discussing how one might play a "Rule Zero" deck, I will also examine both why you might do so, and how you can maximize your chances that your playgroup agrees and has a fun time. Welcome to Breaking the Rules!

Dune Brood Nephilim is the first of a five-card cycle I will be covering all of eventually on Breaking the Rules. In the original Ravnica block, the Nephilim were a quintuplet of creatures that took the set's multicolor theme to its absolute limit by being the first ever four color cards. 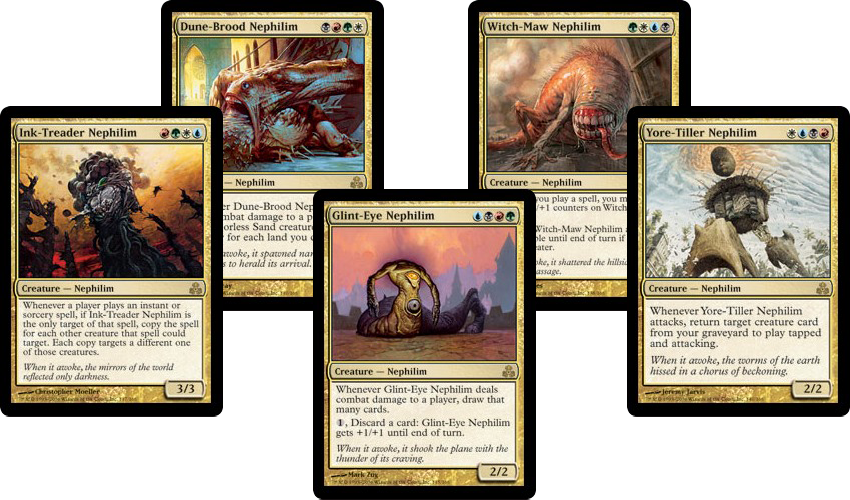 Mark Rosewater has said many times that the Nephilim should have been legendary when printed, and would eratta them to be legendary if he was able to.

"In fact, in all of Magic, there is only one cycle of four-color creatures, the Nephilim from Guildpact. (And yes, with 20/20 hindsight, we should have made them legendary.)"

I think all five of these cards are fascinating. While the color pie has shifted from under a few of them since being printed, all of them did a good job of exploring the four color using abilities that seem simple at first, but are actually quite complicated to take advantage of. I will be starting with Dune-Brood Nephilim because it is likely the one the most people have actually seen in play, as it has appeared in an episode of Game Knights. So, what does this weird little Hill Giant do?

The rule break for this deck is pretty simple; We simply treat Dune-Brood as though it had the supertype "legendary", and is therefore a legal four color commander. Dune-Brood Nephilim has only one ability- When it deals combat damage to a player, create a number of colorless 1/1 sand tokens equal to the number of lands you control. Fans of Hazezon Tamar may notice that the two have a lot of similarities. While Hazezon has room for delayed trigger trickery, and doesn't have to get in for damage to trigger, Dune-Brood gives access to Black, and costs literally three hundred times less to get your hands on.

Of all the Nephilim, Dune-Brood does the best job of pushing you in a lot of different directions with only a single triggered ability. Do you invest equipment and enchantments into the commander to make sure they can get in for damage? Do you use anthem effects to buff your sand token army? Do you try to get as many lands into play as possible to maximize the payoff from the trigger? Do you sacrifice the tokens for value, or do you attack with them? Do you desperately try to make sand tribal happen?

My favorite thing about this commander is that all the strategies I just listed are viable and fun ways to play it. My build of the deck is generalized, dabbling in all of these, meaning it never feels stale and the direction it goes depends a ton on what you draw.

So Dune-Brood wants to get in for combat damage to a player. Unfortunately, lacking any form of innate evasion combined with an ability that produces obscene amounts of value when it goes off means we need to invest into augmenting our commander using enchantments and equipment.

Only one thing is better than getting a combat damage trigger; Getting a combat damage trigger twice. Fireshrieker and Embercleave are equipment that let our weird little monster get double the tokens per combat. Gruul War Chant and Ferocity of the Wilds grant critical evasion and power buffs to not only the commander, but the tokens it makes as well. I'm sure nobody needs me to tell them how good Swiftfoot Boots are, but it is difficult to overstate how important they are when your commander is a removal magnet. speaking of which...

You're going to be amazed how many times people try to kill your commander.Apostle's Blessing is one of several instants in the deck that grant hexproof, protection, or indestructible. Because Dune-Brood is often public enemy number one at a table, I mostly avoid auras, but Benevolent Blessing is the sole exception, as it can be flashed in to act as a soft Counterspell that then also can be used to grant evasion. Shalai, Voice of Plenty protects your whole board while also providing a place to put mana to pump a team of sand tokens into a lethal threat.

It's coarse and rough and irritating and it gets everywhere

Congrats, you've successfully gotten Dune-Brood through for damage once or twice and now are sitting on a double digits pile of 1/1 sand tokens. Now what?

is Tromp the Domains most likely strictly worse than Triumph of the Hordes in this deck? Yes. Is it so much more satisfying to win off of an Overrun variant that uses a mechanic nobody even remembers exists? Also yes. Coat of Arms makes an appearance in the list as something you only ever want to cast on the turn it wins the game. Brutal Hordechief not only makes every sand that attacks deal at least one damage, but can act as a mana sink that lets you force Dune-Brood through for a combat damage trigger. Finally, if you are going big, you might as well go big big. Divine Visitation might be a win-more card a lot of the time, but is sure does win spectacularly.

But let's not get too attached to actually keeping those tokens around. Skullclamp continues to be one of the most broken magic cards ever printed, letting you turn extra tokens into card draw. Etchings of the Chosen honestly feels like Wizards gave this deck a personal gift. Naming sand will buff all your sand tokens, as well as let you sacrifice one per turn to protect Dune-Brood from combat damage and destroy effects. Finally, Nadier's Nightblade, outpost Siege and other similar aristocrats effects mean that even if your opponents panic and boardwipe because you made 30 sand tokens, it's already too late.

one of the problems with 4 and 5 color decks, especially when they have perfect mana thanks to fetches and duals, is that they often devolve into goodstuff soup. It is very easy for them to simply run the best individual cards in every color they have access to with little downside.

However, I prefer to do the opposite. There are so many good cards that I almost never actually play because they're 2 or 3 color and are never quite exactly what the decks I have that match that color identity are looking for.

I absolutely love multicolor split cards. While most players are well aware that cards that grant choices are always more powerful than they first appear, the way that color identity works is often not kind to them.

...Not very often though. For a very long time, the only way to play a 4 color EDH deck at all was to use a Nephilim as your commander. In addition, the Nephilim are all-- With one inky exception-- Far less game warping than thier 4c Commander 2016 or counterparts are. But if someone really doesn't like using a technical nonlegendary as a commander, Tana, the Bloodsower partnered with Tymna the Weaver will play pretty similarly.

I've had a special place in my heart for these weird and underpowered four color creatures since I got one in the very first pack of Dissension I opened. I love how they open up into so many directions with so little text. Omnath, Locus of Creation may be the newest four color card in anyone's memory, but its wall of text design is so much less elegant than a single ability that forces you to explore the strengths of four different colors of magic.

In this deck, I decided to touch on every strategy the commander works with, rather than focusing on just making an aristocrats deck, or a lands deck, or a voltron deck. It's extremely open ended, and I encourage everyone to take a shot at building thier favorite Nephilim! I should note that while this is not a budget deck at all, pretty much the entire cost is tied up in lands. A budget version will probably play a turn or two slower but is still quite viable.