Art is What You Can Get Away With

Don’t get me wrong, I get why aesthetics matter. I run matching basics in all my decks, I run an app on my computer that keeps the lights on my case, mouse and keyboard synced up, and when my son was born with green eyes I swapped him out with a blue-eyed baby when nobody was looking before we left the hospital. I get it.

The reality is Magic players have been dealing with aesthetic disruptions to in this fantasy game since the very beginning. The announcement of Universes Beyond isn’t a deviation from the norm. It’s simply the most recent deviation.

Flavor text has always existed on Magic cards. Today it tends to be used primarily for storytelling purposes, but it hasn’t always been so. Oftentimes historical quotes from real-world sources found their way onto the bottom of a text box, with sources ranging from Geoffrey Chaucer to William Shakespeare to Edgar Allen Poe. This isn’t just an occasional occurrence, either; 12 different cards in the original Alpha set feature quotes from real world literary sources.

This continued onward, with 12 in Arabian Nights, 1 added in Revised, 1 in Antiquities, and peaked with 41 real world flavor text quotes on cards in the Legends expansion. It wasn’t just the early sets, though. Core sets from 2011-2014 all featured flavor text citing non-Magic intellectual property (IP), as have multiple Judge foil promos.

Don’t Think About Making Art, Just Get it Done

Okay, so flavor text is easy to ignore. It’s in small, italicized text at the bottom of the card, and even if it doesn’t come from the Magic universe proper, there’s certainly a shared flavor between a Shakespeare quote filled with thees and yees and a rambling monologue from Urza or Nicol Bolas. That’s not where it ends, though. From the very beginning Magic also co-opted real existing IP right there in card text names, and even in the name of sets as with Arabian Nights.

Lord of Atlantis straight up steals its name from the mythical island used in Plato’s works Timaeus and Critias, which is presumably why it was later replaced with the identical Master of the Pearl Trident.

Like almost all of the Arabian Nights expansion, Aladdin takes his name from the well-known One Thousand and One Nights story collection, also often known as 1001 Arabian Nights or just Arabian Nights. There are only 72 cards in Magic’s first expansion, but probably half of them explicitly reference in name the real-world source material, or even real-world historical figures like King Suleiman reflecting Suleiman the Magnificent.

Then in the Dark, Magic’s fourth expansion, we received another specific mention in a card name, this time with Frankenstein’s Monster explicitly naming the creature from Mary Shelly’s Frankenstein. This isn’t a veiled reference like the ones we currently get with cards like Valki, God of Lies suggesting the Norse god Loki; this is just a plain text lift from classic real-world literature.

It didn’t end there, either. Another entire expansion was released in 1999, Portal Three Kingdoms, featuring exclusively cards referencing the Three Kingdoms period of Chinese history. Unlike the previous cards whose names and function tended to copy real-world literary IP, the P3K expansion exclusively portrayed actual historic figures. The Dong Zhuo as seen in the card Dong Zhou, the Tyrant was an actual person, for example. This is true of all the legendary creatures from the set.

Everything Has its Beauty But Not Everyone Sees It

Okay, okay, I hear you. That was a long time ago, way back in the 1990’s.. Things were different then. It was the kind of era when we as a nation could agree that being a Nazi was bad. Times have changed. That kind of thing doesn’t happen in Magic anymore.

You know, except for all the planes explicitly referencing Celtic, Egyptian, Greek or Japanese mythology. We’ve traded references to real world IP for sets entirely revolving around rebadged versions of myths and pop culture idioms. Godo, Bandit Warlord and Toshiro Umezawa both borrow their first names from the first and last names of noted actor and Akira Kurosawa collaborator Toshiro Mifune, Heliod, God of the Sun is an obvious homage to both Zeus and Apollo, and Hapatra, Vizier of Poisons is very clearly parroting Cleopatra.

The Idea is Not to Live Forever, It is to Create Something That Will

I’m Afraid That if You Look at a Thing Long Enough, it Loses All its Meaning

Even Magic’s frames and borders have changed, and that change is accelerating. Alpha and Beta had the same frame and same black borders, though they had different sized corners. Revised saw black borders give way to white. Things like mana symbols and the tap symbols changed over those early years too. Additionally, keywords were added while various pieces of rules text were update and changed. However, the basic appearance of the cards remained static up until Eighth Edition in 2003. The exception to this was silver borders in Unglued and a unique frame on the Unglued basic lands. Oh and the creation of foils with Urza’s Legacy.

Eight Edition saw a shift to the frame we’re accustomed to day. The font changed, as did the card face design to allow better readability. We also saw a darkening of the artifact card frame to differentiate it from white cards during Fifth Dawn.

Then in Future Sight in 2007 the third third frame in the form of 81 futureshifted design. In 2014 with Magic 2015 there was another font change, the addition of holofoil stamp, and another frame upgrade. Between Eighth Edition and Magic 2015 we also saw borderless basics in Unhinged in 2004 and Zendikar in 2009.

Since then we’ve had Expeditions, Inventions, Invocations, anime, zombie and stained glass planeswalkers, box toppers, showcase frames, and so many variants on basic lands that I’m not going to bother to count. The reveal of the introduction of the alt art Strixhaven: School of Mages Mystical Archive and Japanese Mystical Archive arts seem to indicate this isn’t stopping.

I’m Not Afraid to Die; I Just Don’t Want to be There When it Happens

So where am I going with all of this? Well, I’m saying that while I’m not wild about looking across the table and seeing Pippin, Fool of a Took, is that really any different than seeing this: 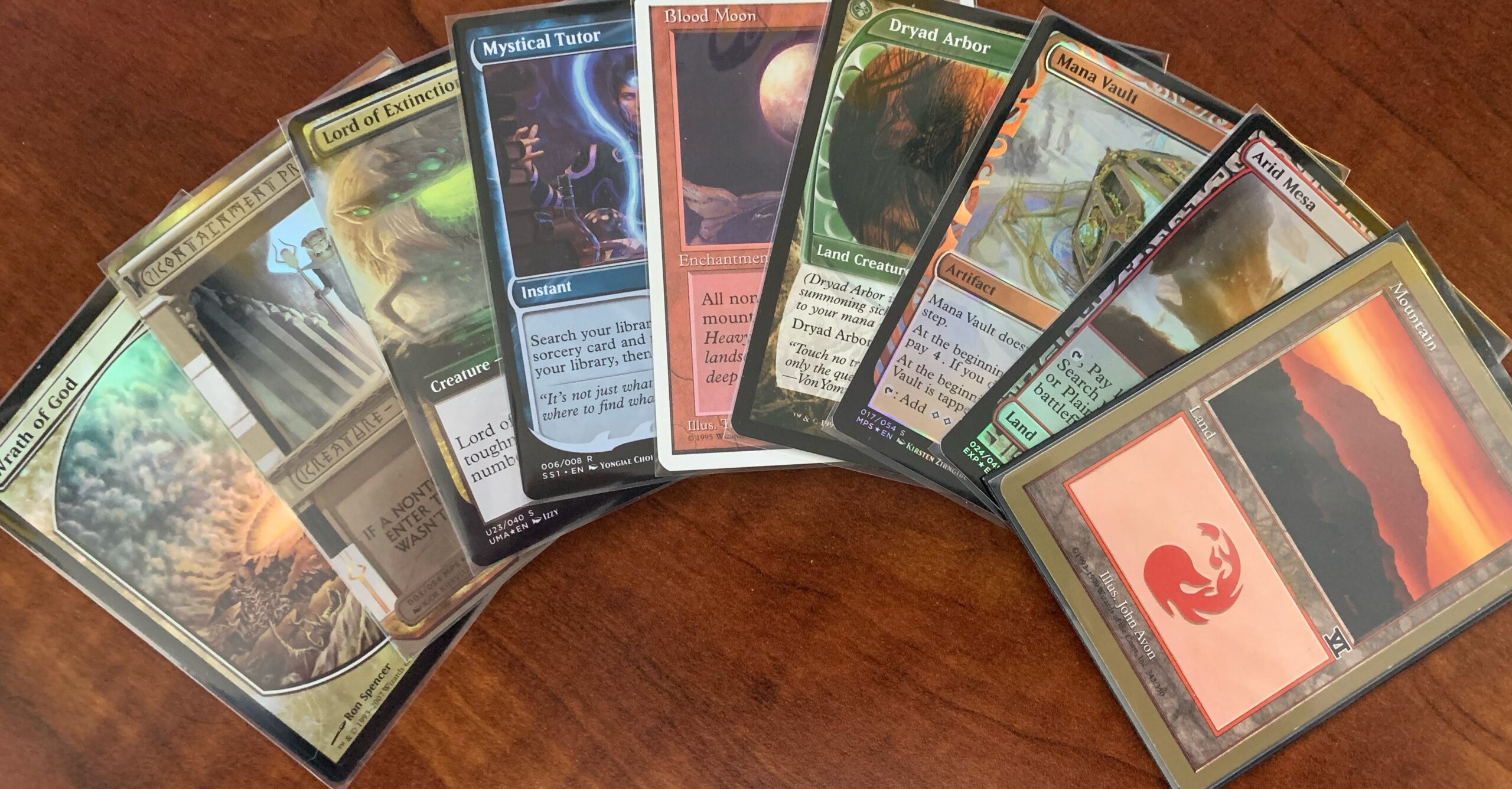 The reality is any disruption to aesthetics or immersion caused by anything from Universes Beyond has already happened. Adding Ringwraiths or Necrons won’t alter that. Visually, Magic is already a mess. Distinctly different-looking versions of an elephant wield swords against an ooze mutant crewing a vehicle. Nothing is going to change with Universes Beyond.

I’d love to hear your thoughts on this however. Sound off in the comments below and share your opinions, and thanks for reading.

You can find more editorial content from Dana here.

Dana is one of the hosts of the EDHRECast and the CMDR Central podcasts. He lives in Eau Claire, WI with his wife and son where he has been playing Magic so long he once traded away an Underground Sea for a Nightmare, and was so pleased with the deal he declined a trade-back the following week. He also smells like cotton candy and sunsets.