Hello friends, welcome back to Battlefield Strategies, the series where we look at real-world battles and see if the strategies involved can be implemented on the battlefield of Commander. Today we are going to talk about one of my favorite characters of the Dark/Middle Ages. He also has my favorite nickname in all of history. Today we are going to look at the prowess of Charles Martel. Martel is translated as “The Hammer”. That is just the perfect nickname for a general. Anywhoo, Charles was the general in a battle that some scholars have called the most influential battle in world history and some have called insignificant. I’m talking about the battle of Tours/Poiters.

In the year 732, the Umayyad Caliphate, one of the largest Muslim empires in history, was expanding. Having recently conquered the Visigoths in what is now Portugal and Spain, Abdul Rhaman Al Ghafiqi led a force over the Pyrenees mountains and began an invasion of the Frankish lands beyond. The main goal was the monastery of Tours, a place of great accumulated wealth. The only real force that could stand in Al Ghafiqi’s way was Odo, the Duke of Aquitaine. Odo’s forces shadowed the Umayyads and did their best to thwart them. After a few confrontations, Odo’s army was starting to wear thin. He alerted the Frankish empire of the Umayyad advance. The Frankish king sent his marshall, Charles Martel, to intercept the invaders and send them packing. There were two problems, he was outnumbered by at least 10,000 and he had no cavalry while the Umayyad forces used heavy cavalry as the backbone of their army. What Charles did have going for him was a core of heavy Frankish infantry that were extremely battle hardened and had fought under Charles for years. They trusted him completely and were extremely disciplined.

Charles led his army through backroads, trying to catch Al Ghafiqi off guard. Just outside of Tours, he found a defensive hill covered in trees and set up his forces. When the Umayyads arrived, they were caught off guard to see an army standing in between them and their goal. Since Charle’s army was staged in the forest, Al Ghafiqi did not know exactly how many men opposed him. Because of this, he was unwilling to commit his full forces. After a couple probing attacks with cavalry that failed miserably, Al Ghafiqi was forced to commit to an attack that he knew he wasn’t prepared for. His cavalry charged again and again into the very disciplined and experienced Frankish troops, but the combination of moving uphill through forest allowed for something that no one in that time would have thought possible. Infantry without anti-cavalry lances had withstood charges from heavy horse and won the skirmish.

The Umayyads lost around 12,000 men to the Franks' 1,000. The Umayyads retreated from the battlefield on the first day. When the sun rose on the second day, Charles led his men to the Umayyads’ tents and found the enemy camp to be abandoned. No similar force ever attempted an invasion beyond the Pyrenes again. Many historians claim that this battle scared Umayyads and any caliphate that came afterwards ending their dreams of conquering the world. Had it not been for Charles, the entire continent of Europe would become followers of Mohammad. At least, that's what the theory states. Others claim that Al Ghafiqi was never truly invading but was leading a large raid force and the Umayyads never intended to invade France. Charles won a skirmish and the Umayyads didn’t feel like it was worth their time to try again. Whichever theory is correct (or some third option that lies somewhere in the middle), this battle still played a major role in history. Charles believed that the king he served was essentially worthless. After he won this battle, he sent an emissary to the Pope asking the question that if he did all the work ruling the Frankish people, shouldn’t he be the king? The Pope agreed and Charles’ son took power, creating the Carolingian dynasty. Charles’ grandson was also name Charles, though we know him today as Charlemagne, the man who conquered Europe and set up the Holy Roman Empire.

Ultimately, the strategy that allowed Martel to take the field of victory over a numerically and technologically superior opponent was hidden information. Al Ghafiqi never had sound intel on Martel’s numbers or types of units, while Martel had almost perfect information on numbers and even tactics, thanks to Duke Odo. One thing we know as Magic players is the importance of intel. I’ve always been amazed when watching the pros, is how they always seem to know exactly what card their opponent has. Our strategy today deals with hidden troops. In today’s deck, nothing is what it appears.

This deck is a special one since our strategy is misinformation. We are using a old favorite amongst EDH players. We have hidden commanders! Our official leader is Xyris, the Writhing Storm. Xyris allows us to make multiple tokens which plays into our true commanders’ role, but he is mostly there to give us access to Temur colors. Our hidden commanders are Brudiclad, Telchor Engineer, and Esix, Fractal Bloom. All of a sudden, we have an army of tokens that could be ANYTHING!!! Essix lets us make a token of one of our finishers and Brudiclad turns our army of non-threatening tokens and turning them into a mass of monsters that will run over our opponents.

The biggest thing we need if we are going to run hidden commanders is a reliable way to make sure we can get our commanders out every game. To ensure this, we are going to run a bunch of tutors. The first one we will run is Fauna Shaman. Being able to turn any creature in our hand into our commanders is the best kind of tutor. We can also use Uncage the Menagerie to find both of our commanders. Since they both cost six, we can grab each of them and a few gamewinning creatures to make tokens out of to boot. Our final tutor card is Green Sun’s Zenith. Simply pay one more than the casting cost and you have the exact piece you need to end the game.

If we are going to win with Brudiclad, we are going to need a ton of tokens to turn into big things. Some of the best ways to make tokens, actually make non-creatures. Brass’s Bounty can make us a huge pile of treasure tokens which we can use to power out more plays or save around to become sudden attackers when we reveal our true intentions. Avenger of Zendikar can put the same number of tokens out, but it comes built-in with its own endgame, just in case something bad should happen. Lastly, we have Koma, Cosmos Serpent, which can crank out four 3/3’s a round. Once we have our army of tokens, all we need is our finisher to copy.

The main reason we have Esix in our deck as a hidden commander is so that we can create a token of one of our main finisher cards and use Brudiclad to turn all of our Treasures into this huge beater. Two of my personal favorites are Sharding Sphinx and Utvara Hellkite. If we are able to turn our attacking tokens into either of these big flyers, all of them trigger. Say you attack with five copies of the Hellkite, five triggers go off, each giving you five tokens that will swing for a total of 30 Hellkite triggers on your next turn. From there, the math gets silly if there is still a game going at that point. Another finisher to grab is one that shows up in just about every pre-con deck that even remotely cares about artifacts. Myr Battlesphere has been reprinted so many times, it's got to be on the same level as Colossal Dreadmaw. 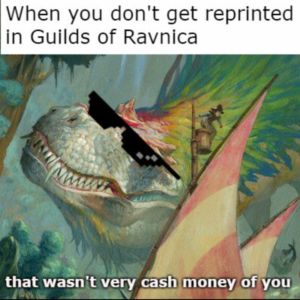 As meme-y as it might be, multiple copies of the Battlesphere attacking at the same time will end games quickly. That’s all I have for you this week. What battles would you like me to break down? Leave a comment below and I may just do it! See you next time.