Welcome back to Battlefield Strategies, the series where we take a look at real world battles and see if the strategies involved can be implemented on the battlefield of Commander. Today we are taking a look at a battle that has been immortalized by the Bard himself. If you’ve ever used or heard of the term “Band of Brothers,” which has been used in literature, song, and film, you are quoting Shakespeare who was referencing this battle. I am talking about the Battle of Agincourt where King Henry V defeated a vastly superior French army and set the stage to claim the rule of the French throne. Let’s jump right in and then see if we can apply the lessons to Golos EDH!

The Hundred Years War was a massive continuation of struggles between the French and the English between the years of 1337 to 1453 for the right to rule the French throne. The English had the technical claim to the throne but the French didn’t want to be English. Towards the end of the war, the English king, Henry V, decided to make a claim and invaded France. He captured the Fortress of Harfleur, but it cost him much more than he had intended. His army was in shambles. He had at most about 8,000 men, a fraction of his original force. About 83% of his current army was archers and the rest were men-at-arms, heavily armored but unmounted soldiers. His campaign was off to a horrible start and he was looking to get back to Calais where he could either end it and sail back to England or spend the winter months regrouping. Unfortunately for Henry, the French had raised an army to relieve the siege at Harfleur.

Since the town had already surrendered, the army decided revenge was better than relief. This army was also in between Henry and Calais. About halfway through the march, the English came to the Somme river, and on the other side waited the French and their army of around 25,000 with 10,000 cavalry. Henry now had to travel south to go north. His army had to march along the Somme with the French shadowing him trying to get ahead of them enough to find a way for his army to safely cross the river without harassment. It would be doom otherwise. Through daring and luck, he managed to cross the river and continued north, but was cut off and battle appeared to be forced. On the 24th of October, the French camps celebrated the eminent victory over the incredibly outnumbered English, while the English camps were silent.

During the lull before the battle, Henry’s scouts reported that there was a field surrounded by heavy forests close by, those fields were soggy and soft due to heavy rains that had fallen recently. Henry made his move, anticipating the tactics the French wanted to employ, and set his army up in this narrow field, forcing the French to meet him on his terms. On October 25th, the battlelines were drawn and the two sides faced off. At first the armies faced each other, the stalling game favored the better fed French while the English were tired and hungry after forced marches that covered 260 miles in 17 days.

Henry decided to make the first move. His army advanced to the edge of the range of his archers. English longbows had a distance advantage over French bows so Henry could begin firing without fear of return fire. His archers began firing into the French armies and prompted a brash charge from the cavalry, made mostly of noble knights who didn’t necessarily care for their general who was a mercenary who was given nobility while they were born to it. They also were more concerned with gaining personal glory rather than maintaining a team-oriented approach. This charge proved disastrous. 10,000 cavalry charged headlong into 5,000 archers firing as fast as they could. Henry had also ordered his archers to hammer large sharpened stakes into the ground in front of them. These stakes would halt any incoming charge and the woodlands on either side of the field kept the archers from being flanked. The initial charge was an utter failure. 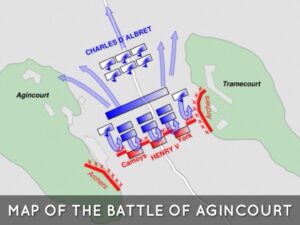 With the cavalry being demolished the first line of French infantry advanced. The foot soldiers were now slogging through a massive mud pit that had been created by the charging horses. The slow advance was met with a “terrifying hail of arrowshot.” The front line of the French was whittled down by the arrows and funneled into the men-of-arms at the English center. The second line of French was sent shortly after the first and proved to be the most disastrous part of the whole battle. The first line was eventually beaten by the English and tried to turn, but the ground conditions and the press of their “reinforcements” pinned them against their enemies. It is said that the press of men against the English was so great that the French army could not even raise their swords to fight back. The French were killed or captured in the thousands. The French lost over 6,000 men while the English lost about 600.

The Battle of Agincourt was won on two points of strategy. The main advantage the English had was the terrain. Henry specifically picked a place that had heavy woodlands to keep the French cavalry from out-maneuvering and flanking him. He also chose a field that was soft from rain and would favor his lighter forces against the heavily armed forces of the French. His own heavy troops, he positioned in a way that they would not fight in the slough  that was created. The second point of strategy was that Henry was able to direct how his opponent fought. He knew the mind set of the French nobility and goaded (pun totally intended) them into attacking him, setting the field up the way that he wanted it. He was able to use archers to determine how his opponent fought him and that gave him a victory.

This is the first time we do not have a commander that exemplifies our entire strategy. Golos, Tireless Pilgrim will be the pilot, and while this Golem is not crucial to our strategy, he can certainly help it along. We have included a good amount of blink effects to gain the enters the battlefield trigger as many times as we can, because lands are going to be very important.

Our first strategy and our main source of victory is land. Just like the terrain was the main point of victory for the English, lands will close out our opponents. Maze’s End will just end us the game provided we meet its admittedly steep cost. Golos can help get us there fairly quickly though and can even search up Maze’s End or any other land finisher we need. Dark Depths and Westvale Abbey can also put games away if you can get out the monsters that dwell inside them. Valakut, the Molten Pinnacle may seem like a hard way to win in a five-color deck, but with Blood Moon and a Scapeshift, it can spell game over for our opponents.

Our second strategy is combat control. Like Henry, we want to try to control our opponent’s combat so that it always goes as best as possible for us and as poorly as possible for our opponent’s. Brutal Hordechief not only can force your opponent’s utility creatures to block, he lets you decide how your opponent block so that you always come out as best as possible. Don’t forget though, you don’t have to be the attacking player to activate this ability. Use it to wreck two boards at the same time! Odric, Master Tactician is a great finisher if you just need a way to punch through damage. As long as you are swinging three other creatures, you get to decide if and how your opponent blocks! Aetherize is one of my favorite board wipes! I find that players rarely play around it, even when they’ve seen it before. It can be absolutely backbreaking to a player who decided to get too aggressive.

Let’s take a look at the deck list and gaze at all the goodies. See if you can find all the fun lines of play to take over a game! That’s all we have for this week. Join us next time when we cover my first fan request! In the mean time, enjoy Shakespear's speech from Henry V narrated by the great John Hurt. See ya then!