Image from Attack on Titan © Kodansha

Warning: this article contains spoilers from Attack on Titan, specifically seasons 1 & 2 of the animated series.

Welcome to Alter of the Brewed, the article series where we transform your average Commander deck into one giant thematic monstrosity. Strap on your vertical maneuvering equipment because things are about to get very, very tall.

When we brew thematic decks, it's often because we see some obvious parallel between characters, plot points, or events in some form of media and Magic: the Gathering cards. You might think that Kenrith, the Returned King is just like Aragorn from Lord of the Rings, and so you build a deck with some Legolas stand-in, and a Gimli, and a Gandalf, etc. We have certainly built, and will continue to build, decks this way, but I believe we can do something more powerful today.

There is a reason humanity has been obsessed with stories for as long as history reaches. It's in good stories that we find peace, hope, adventure, and often a place we would like to temporarily find ourselves, a place different from our current reality.

Magic is so incredibly expansive that we can use its tens of thousands of cards as a medium for art, much like a painter with nearly endless colors at their disposal, and so it is with these cards that I believe we can capture the very essence of a story, build a deck that creates an experience that is more than just a game, and not just merely about imitating similar-looking characters. Last week's The Little Mermaid article captured this well, I'd like to think, as its primary focus was to represent the central plot of the film.

This week, we're going to zero in on a few significant plot points of Attack on Titan and attempt to recreate them. Don't worry, there will still be enormous titans involved. But I believe this will create something powerfully memorable for everyone we sit down to play with.

When researching cards to build this deck, I first considered how we could be like Eren and the Scout Regiment, seeking out monsters and taking them down, but I've played plenty of games of Commander where none of my opponents are really playing anything I would describe as... well, titanic. Maybe your pod is a Rogues deck and a control deck and something strange like Zedruu the Greathearted, and suddenly taking down a generous goat commander doesn't really give you the sensation of titan hunting.

So I searched Scryfall for the word "titan," just to see if it sparked any inspiration. That's when I came across this card:

I was tempted to overlook it, but then I had this haunting image come back to me from the finale of Season 1: 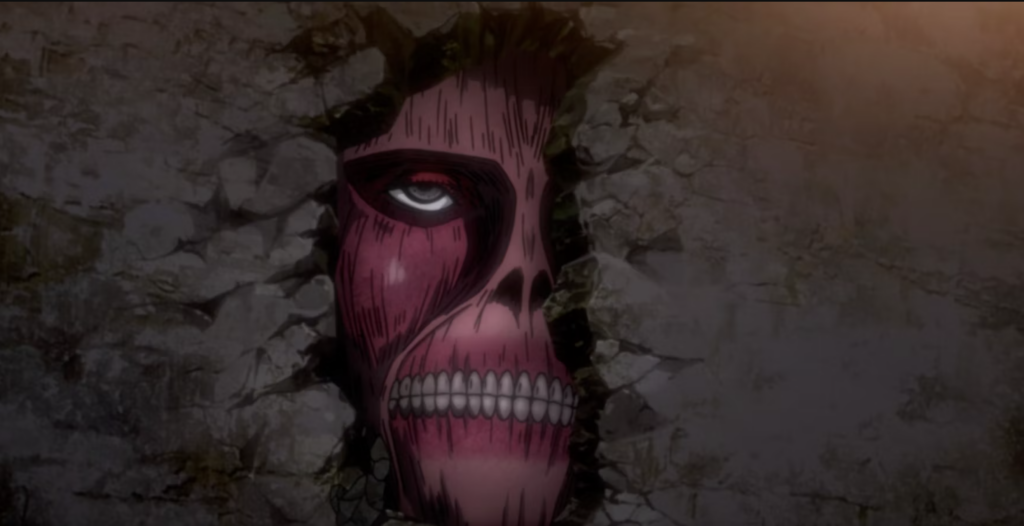 The Titans are in the Walls

This is where we really get into some spoilers, so if you missed our initial warning, turn back now.

We learn, little by little, juicy pieces of information about the mysterious titans that have overrun the world. One is that humans can become titans, as Eren is surprised to experience firsthand. Second, we learn that for some reason yet unknown, the walls that protect the people are made up of the very beings they are guarding humanity against.

This led me to wanting to build a deck that used cards like Transmogrify to transform our creatures, maybe some Humans and maybe some Walls, into giant monstrosities. If you're playing this deck with a group who has never seen it, you would even be creating your own version of this very plot twist, because no one is going to expect your Wall deck to start Transmogrifying into a Giants deck.

So I began looking into commanders that might suit this strategy in colors that could at very least cover red and green (if we remained attached to our friend Towering Titan). And that was when a second plot point seemed to land right on the nose, and serendipitously could really lean into the idea of Walls protecting something precious. 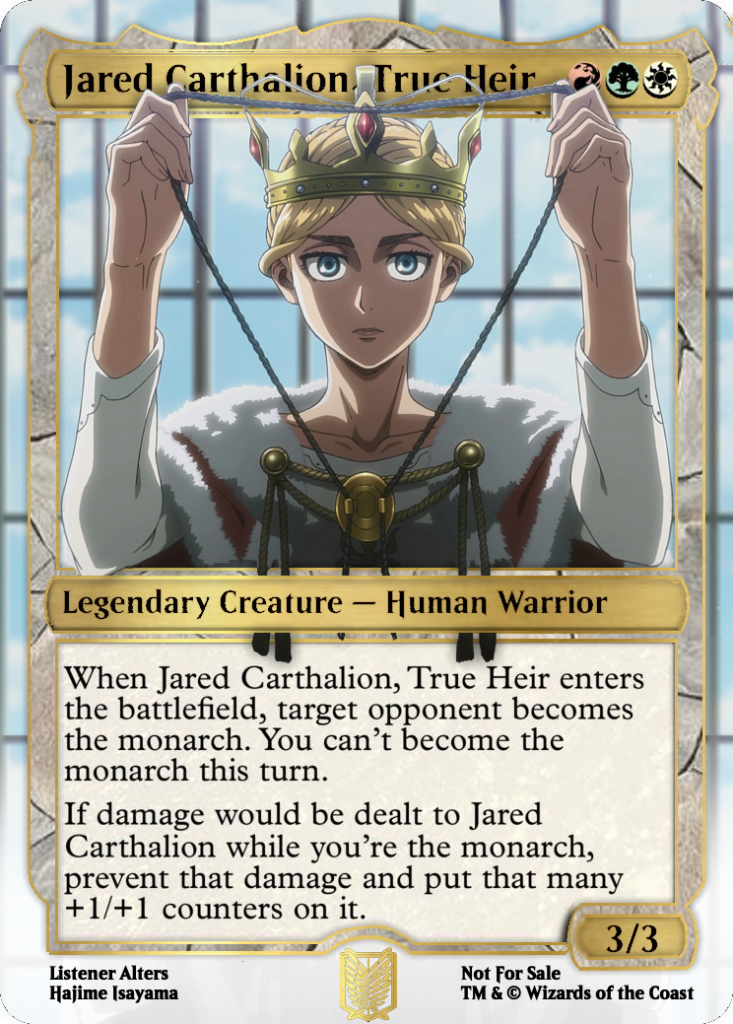 After considering Jared Carthalion, True Heir for a moment, it dawned on me that a predominant heir to the throne was not only conveniently a major plot point of the series, but that it actually synergized with our deck really well if we leaned into the Walls subtheme. A deck about Walls protecting the Monarchy, which eventually prove to be titans themselves. It felt much too flavorful to pass up.

As you play this deck, think of it as a long-game deck that combines Walls with Giants. We want to get down some Walls quickly to make early attacks useless. Then we bring in Jared Carthalion, True Heir to introduce The Monarch to the table. Once our Walls get outscaled, we transform them and other small creatures into titans that will take over the board.

Conveniently, Walls not only buy us time to get our game plan going, but several of them will ramp us there sooner.

Some will buy us a little bit of value no matter when you draw them, and others synergize with our transformation effects pretty nicely.

And some Walls even give us finishing power in the late game by giving our Giants evasion or haste! (Plus, I can't help but chuckle at the idea of sneaking a titan through a secret tunnel behind a bookcase.)

In lieu of a one-for-one analogy section, this week I'm just going to put some of my favorite Attack on Titan flavor wins in front of your eyeballs. Anything come to mind that I've overlooked?

I hope that if you love Attack on Titan, I've given you a unique way to build a deck that pays the series homage, while also supplying you with the power to take down a pod. Please, like always, sound off in the comments if you get a chance to try it.

And as a final note, you can officially find all of my Alter of the Brewed decklists in one convenient place over on Archidekt, a fantastic and ever-developing deckbuilding site that conveniently allows me to silo a subcategory of decks I've built into a shareable folder. Go check them out!