Hello, and welcome back once more to the artful breakdown, the article series where I take you through some of the art of Magic sets to talk about what makes them so awesome. The never-ending hype train of Magic barrels ahead, taking us onward through The Brothers' War. Setting that conflict aside for a moment, though, I'd like us to spend a little time to stop and admire the scenery of Unfinity one last time. Specifically the scenery created by one artist in particular: landscape painter, father of one, and wearer of fantastic hats: Bruce Brenneise.

Bruce is new to the game, and Unfinity is, chronologically, the first set he actually worked on, though by now you've clearly seen his work in other sets. Full disclosure, Bruce has been an acquaintance, semi-mentor, and online friend of mine for awhile. Once I learned his art would be a part of Unfinity when the first news dropped about it, I knew immediately (once I had this column) that I wanted to talk to him about his work. I'm thrilled he took some time out of his schedule to give all of us a chance to get to know him better.

Artful Breakdown: Preliminaries first. How did you get started as an illustrator? Was this something you always wanted to do or did you get bit by the bug later? Were you self- or formally taught?

Bruce Brenneise: My grandfather, Harry Baerg, was a professional illustrator, mostly focusing on nature and animals, so I had a role model and my family's blessing. The big challenge was mostly deciding whether I wanted to invest my time and energies more into art or writing. So at the very least, I'd say that art was always one of my main options.

Coming across art books by Michael Whelan and Keith Parkinson was another major impact to that decision. Finally, when it came time to choose a college program, I ended up at University of Michigan's School of Art and Design, but up to that point it was entirely a toss-up whether I'd have gone for a creative writing program instead. I mostly studied the sub-field of scientific illustration there.

I feel like this story is so rare. Usually you have the family pushing a child against art. It's great here you have the opposite. And it's clear from his preferred subject matter Bruce's grandfather had some serious influence on him.

AB: I remember you said you lived abroad once upon a time. What was it like and what kind of mark do you feel it left on your work?

BB: After college I ended up living and working in China for six years. It was a detour from my intended career, but it kept me moving forward at a time when I didn't see a clear path to my goals. However, I have no regrets, because the experiences I had there, as well as traveling throughout nearby countries in Asia, had a huge impact on me as an artist. I have reference photos I took there and in-depth knowledge of natural wonders that few folks outside those regions even know about. It gave me a much wider mental library of experiences, cultures, and places to draw from as a result.

AB: You've got a clear affinity for environments. What draws you to that specialty?

BB: Growing up, my go-to type of art was actually mapmaking. In some ways, illustrating landscapes is an evolution of that; you just tip the POV from above the land to face it. Either way, you're telling stories through the character of the landscape itself. Travel is also one of the great joys of my life. Getting to imaginatively 'travel' to places that don't exist is an extension of that (and one that is increasingly valuable as the logistics of travel get more complicated these days). 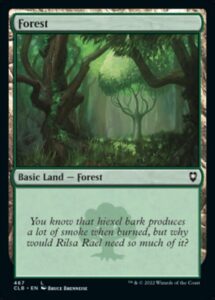 I love these answers. You can see this love of the natural environment and travel in so much of what Bruce does. There's a specificity to his painting of environments both for Magic and other properties that you really only get from the kind of person who spends real time out in nature absorbing it. When Bruce paints, he treats the land like a character. 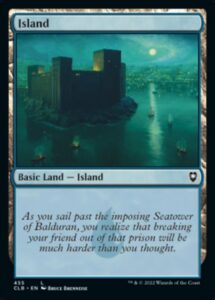 AB: Some of the first pieces I and I'm sure a lot of people know you for are from Slay the Spire. What was the path like from that to working for WoTC? No road in this business is particularly smooth, and I can't imagine this was different. 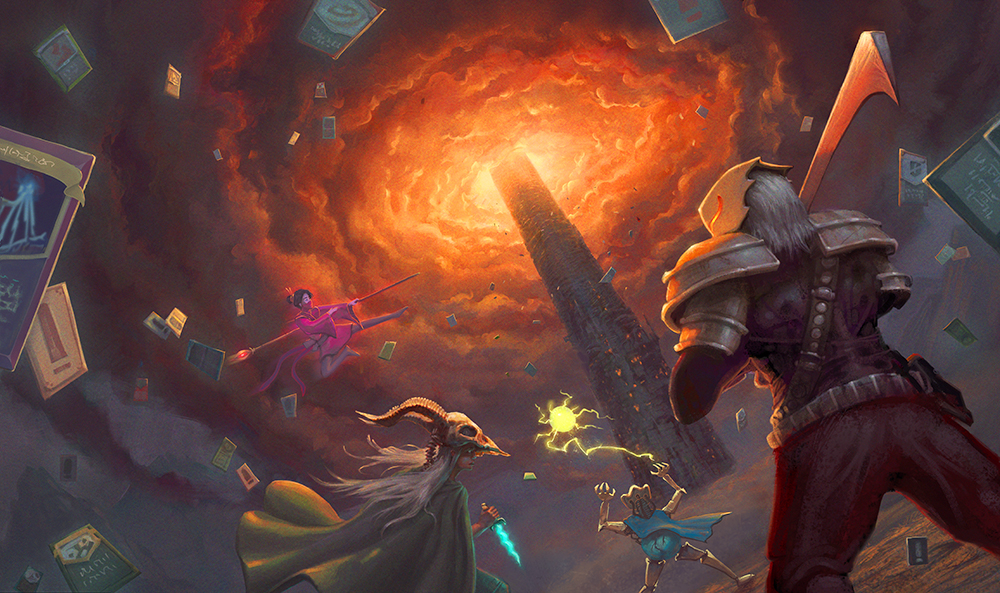 BB: I got very lucky with Slay the Spire. They were one of my first clients, at a time when I barely knew what I was doing and they were just starting out as indie game developers. The thing about this sort of career is that it does rely on a lot of luck... but also being prepared to make the most of it. The path from Slay the Spire to Wizards of the Coast was a process of continually getting myself out there, making friends who could point me to relevant opportunities, and being true to myself as an artist (as much as possible) so that I was developing in the direction needed to take advantage. It took about four or five years to go from those first clients, through some very important intermediary projects like Numenera, to getting an email from MTG.

AB: How did you get picked up for Unfinity's Shocklands? What was it like working on pieces that had a comedic slant to them? 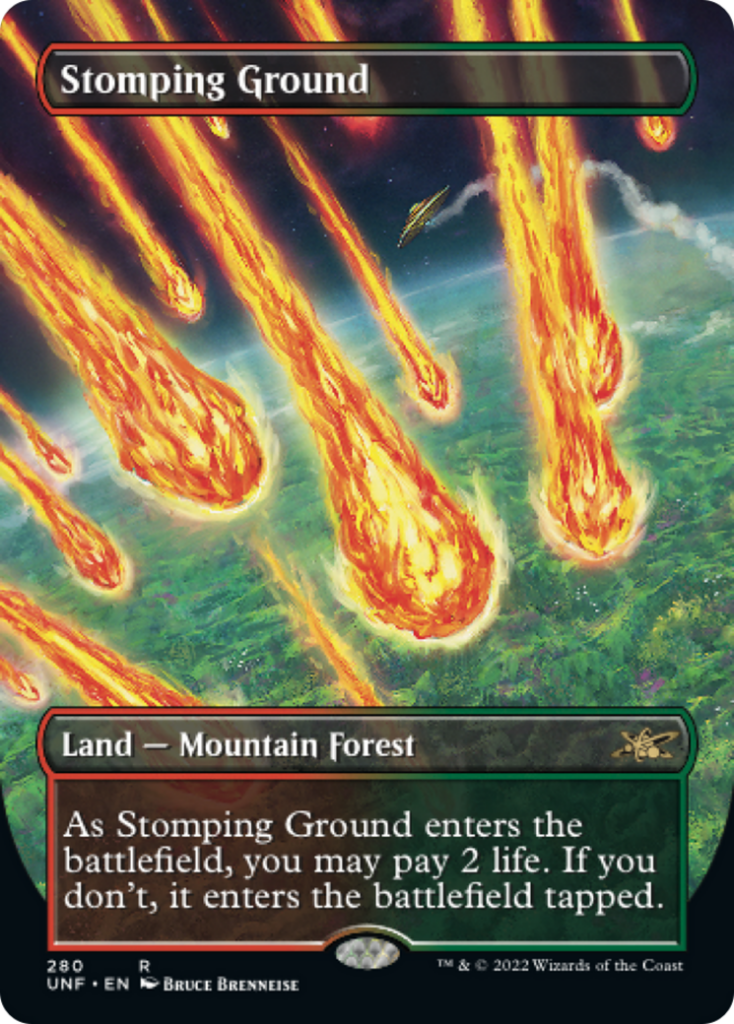 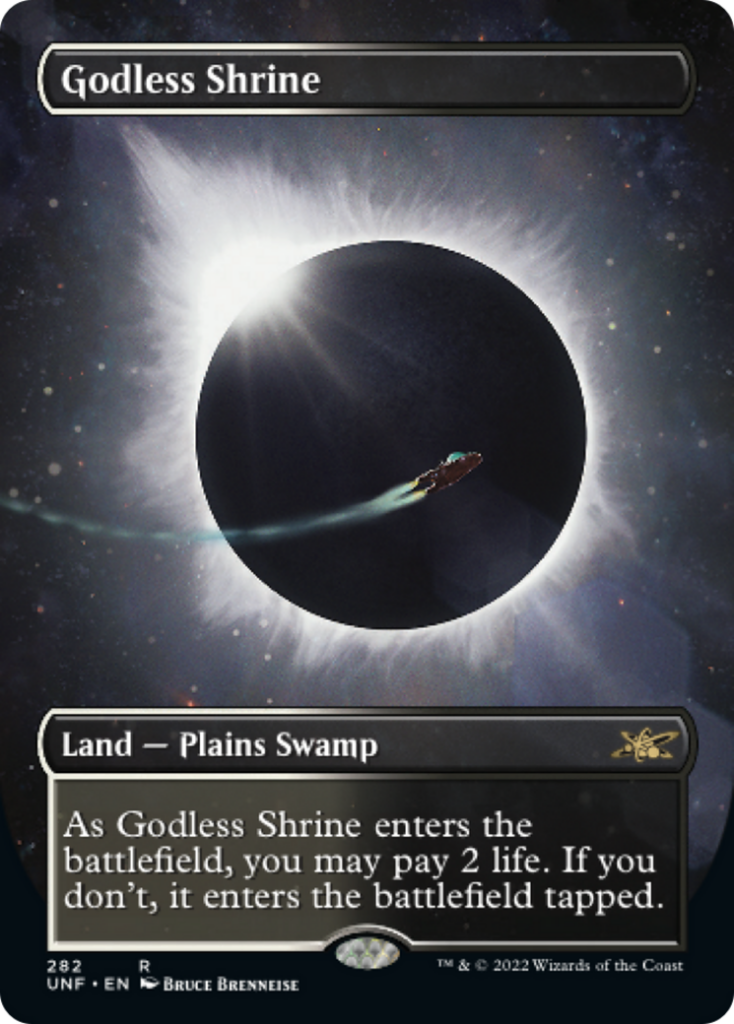 BB: Three years after submitting my art to the WotC artdrop, I finally got an email from one of their art directors, asking if I'd be available to work on a 'fun release' they thought I'd be a great fit for. It was a big shock to be working on a retro-futurist comedic space setting as my first project for MTG, but also a lot of fun. I think of everything in the set, the lands and shocklands cards are probably the least comedic. However, for Breeding Pool I played up a lot of comedic sexual innuendo in the shapes, the one-eyed snake aliens, anemone plants, peach-shaped lotus flowers, tentacle trees and so on, so that was a lot of fun. 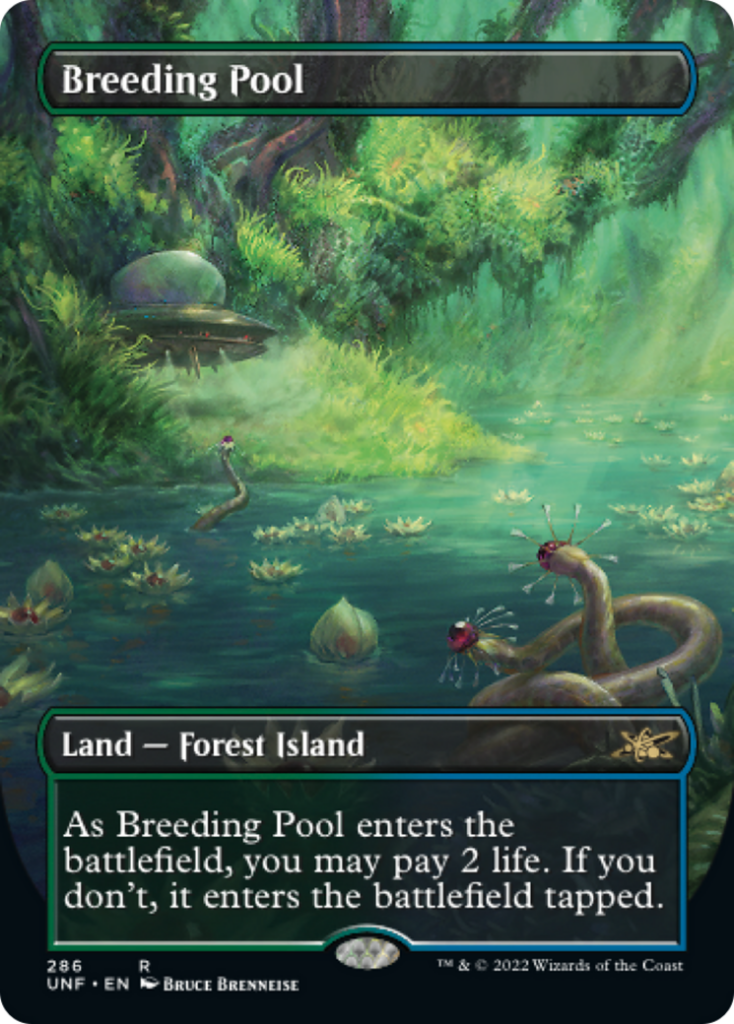 This story tells me WoTC was pretty aware they'd be using the shocklands quite early on. Between his work on the sci-fi Numenera art and general ability to create interesting environments in a wide range of moods, it's not at all surprising they'd tap someone like Bruce for work with those in mind.

AB: What was something special you enjoyed about the 3 shocks you painted for this set?

BB: Godless Shrine ended up being by far the simplest piece of the three, but consequently also the most elegant of the three designs. I loved seeing that one come together.

AB: What do you consider your greatest strength as an illustrator? What's something that's a weakness or tough for you to paint?

BB: I think my greatest strength is probably in worldbuilding: designing weirdness and then reasons, history, and narrative to explain it. On the other hand, although characters are often an important part of telling a story in art, I find myself least drawn to them. That can be the most frustrating part of a piece. 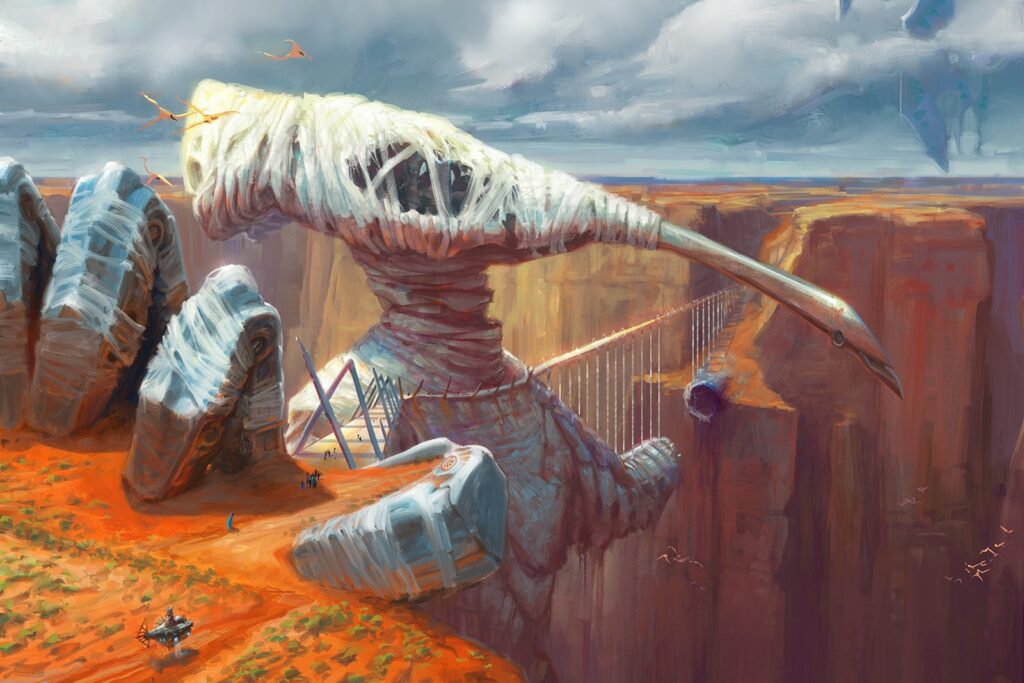 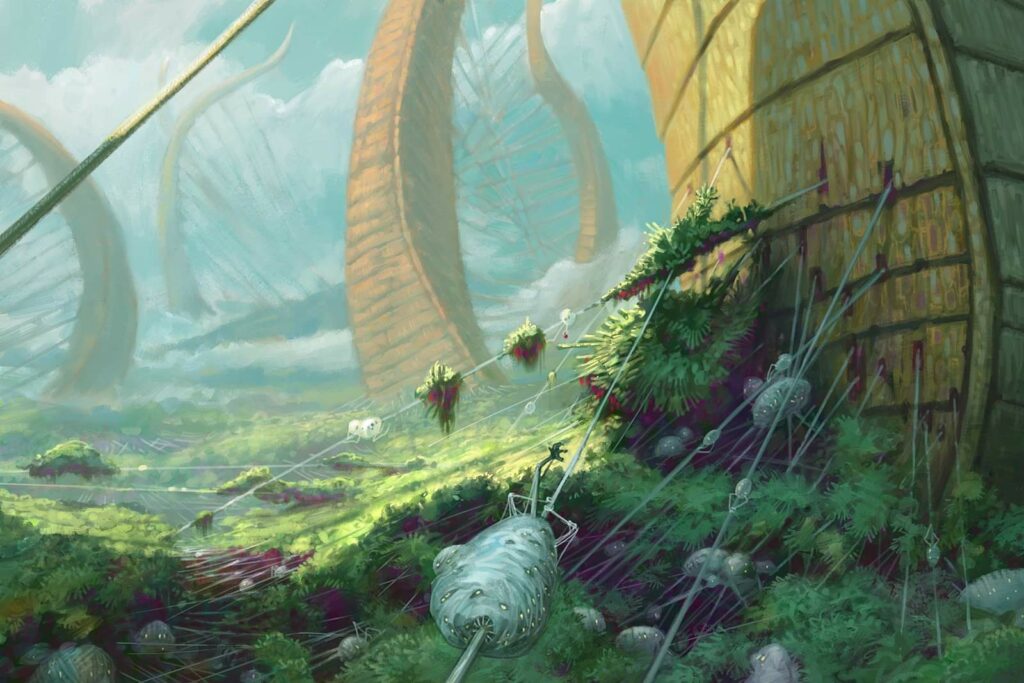 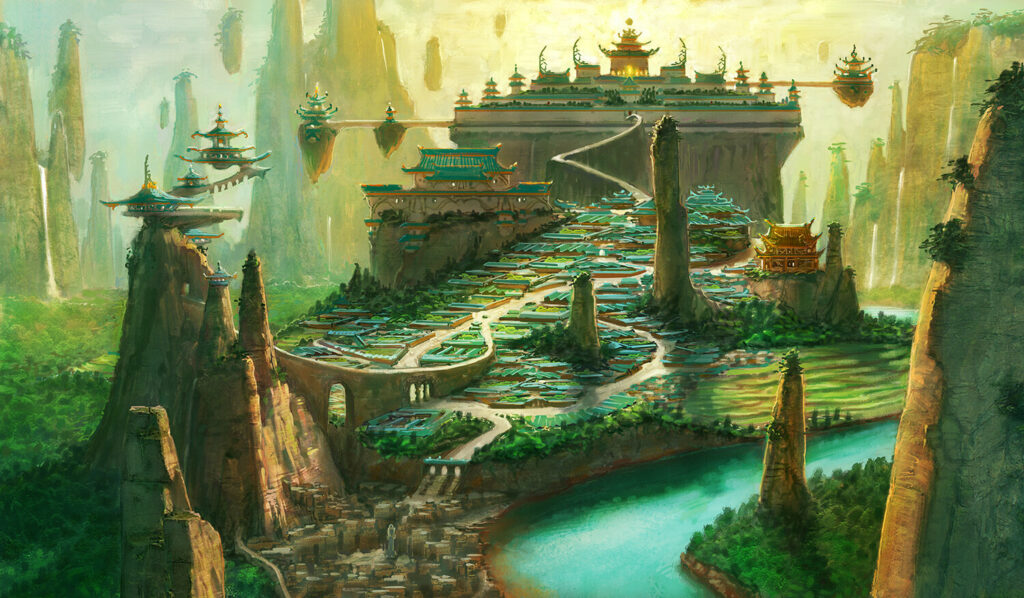 AB: What's something you'd like to try artistically that you haven't gotten to yet, either for Magic or another property?

BB: I'd love to be on a concept push, to get to build up a plane or setting from the ground up. To a large degree it's the sort of work I've done with my Numenera illustrations. I'd love to do that for something like MTG as part of a team.

AB: I hope you get to. I agree, the worldbuilding is your strength. I'd love to see you bring the kind of environmental appreciation you have to the aesthetic of a whole world. I'm certain a great many Magic fans will be thrilled or it as well.

That concludes this Artful Breakdown. I'd like to thank Bruce again for taking some time to share all of this with me and you. I'm certain we'll be seeing Bruce as a landscape illustrator in this game for years to come, and I'm thrilled Magic has a new master of environments on its roster. Join us next time when I'll pull back the curtain on some spicy pieces for The Brothers' War.